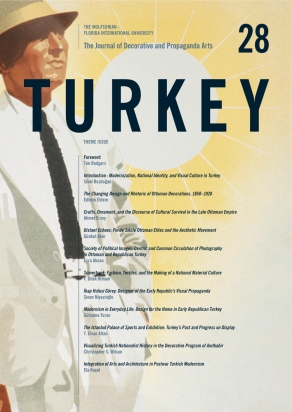 As in many countries outside of western Europe and North America, Turkey’s encounter with modernity has largely been the result of an official modernization project “from above.” In the absence of the material and social conditions—industrialization, capitalist production, urbanization, and the existence of an autonomous bourgeoisie—that characterized the Western world, elites seeking to modernize Turkey had a strong sense of delayed development and an urgent desire to catch up with the West. This sense of urgency accounts for their reliance on the power of representation, especially visual and material culture, to express modern ideas, institutional reform, national identity, and social progress. The resulting experiments touched virtually every creative field, from architecture, painting, and sculpture to interiors, fashion, textiles, industrial design, photography, and graphic design.

Creating a modern national identity for Turkey was a vast undertaking with uneven results. In scrutinizing these efforts through multiple lenses, this vividly illustrated volume presents a particularly compelling example of the belief in the capacity of form to remake content.

Sibel Bozdogan has been a lecturer at the Graduate School of Design, Harvard University, since 2000.

Issue 27: Souvenirs and Objects of Remembrance