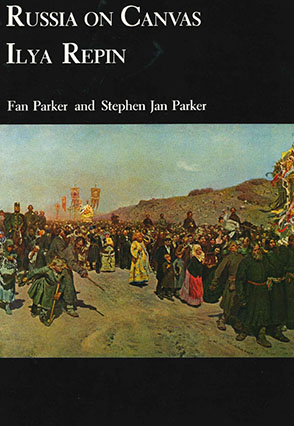 This volume illustrates a wide selection of his major works including some works held in the U.S.A. which have never previously been reproduced. Biographical notes on Repin's many friends and portrait subjects provide a cross section of the Russian cultural establishment.

The socio-historical turbulence of his times and the stylistic evolution in Russian painting form the background for Repin's development as man and artist. To convey the national status of Repin's achievements, the authors have written of Repin as he himself perceived his life and his art amidst the political, social, and artistic activity of his day. Russia on Canvas thus gives a unique view of a major Russian artist to the English-reading public.

Fan Parker, a Columbia PhD, headed the Russian Department at Brooklyn College, CUNY, and is now Professor Emerita. Author of several books, she has traveled to the Soviet Union many times to do research of the USSR.

Stephen Jan Parker , a Cornell PhD, is Associate Professor of Slavic Languages and Literatures at the University of Kansas. A National Endowment for the Humanities Fellow, he traveled to the Soviet Union to consult with Repin scholars. He is the co-founder of the Vladimir Nabokov Society and is now editor and publisher of "The Vladimir Nabokov Research Newsletter."