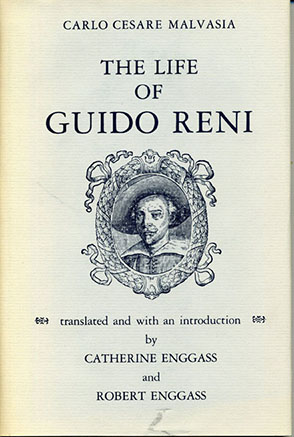 But Malvasia's biography is far more than a chronicle of facts about Reni's art. Through a wealth of illustrative incidents based on eyewitness accounts we come to know Reni as an individual, driven by compulsions, beset by phobias, and isolated by pride. He appears as a man alone in a crowd, desperately anxious to defend his position as a major artist, enormously vulnerable to what were often imagined insults. We see him as an individual obsessed with sorcery and witchcraft and having an overwhelming compulsion for gambling that eventually brought about his ruin and hastened his death. No earlier biography provides so much material about an artist's inner life.

The editors have added a substantial introductory essay to their translation of Reni's biography along with an analysis of the text and a section on Malvasia and his writings. Malvasia wrote the best early guidebook to the paintings of Bologna, and his vast compendium on the Bolognese School of painters is the most important regional "Lives of the Artists" that appeared in Italy during the 17th century. As this is the first book on Reni in English, the editors have added a section intended as an introduction to his rather complex stylistic development. Eight illustrations are included to show some of Reni's most important works.

Catherine Enggass's many translations include Baldinucci's Life of Bernini, the Manetti Life of Brunellschi, and several volumes of the Corpus Palladianum. She is also co-editor of the vatican library edition of Pio's Lives.

Robert Enggass, Callaway Professor at the University of Georgia, is the author of The Painting of Baciccio; Early 18th-Century Sculpture in Rome (which won the Borghese Prize in 1977); and, with Jonathan Brown, Italy and Spain, 1600–1750, as well as many articles in art history journals.