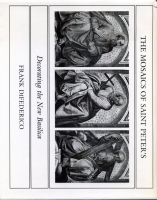 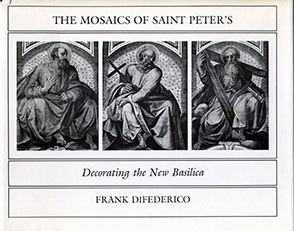 The art of mosaics was revived in Rome during the late 16th century when, after a period of long neglect, a combination of theological, archaeological, and architectural factors made it seem the inevitable medium for decorating the new basilica. Mosaics had been the traditional early Christian medium for decorating churches, including the original St. Peter's completed by Constantine in AD 326, and Counter-Reformation church historians were seeking Roman Catholicism's roots for the decoration of the new basilica.

Five doctrinal themes for main sections of the building were established. The first cartoons were made by leading artists—Raphael, Caravaggio, Pietro da Cortona, Poussin, and Guido Reni among them and a Vatican Mosaic Studio evolved to translate the cartoons into mosaics. (The studio was formally established in 1727 and continues to provide mosaics on commission to places around the world. ) Some craftsmen became artist-designers, while some artists became craftsmen. Gradually the original baroque aesthetic was modified—for instance, by the 19th century return to pre-Renaissance styles and by the 20th-century neo-impressionism. The authors research included study of extant original cartoons and the Studio's extensive archives; the accurate and stunning photographs were taken under his direction by Vito Rotondo. The Mosaics of Saint Peter's will be of value to specialists and students in the history of art and architecture, church history, and archaeology and will interest any reader who loves Rome and its monuments.

Frank DiFederico is the author of articles about the Saint Peter's mosaics for Art Bulletin and Storia dell'arte, and of the book Francesco Trevisani: Eighteenth Century Painter in Rome. He earned his PhD at the Institute of Fine Arts, NYU, and teaches art history at the University of Maryland.