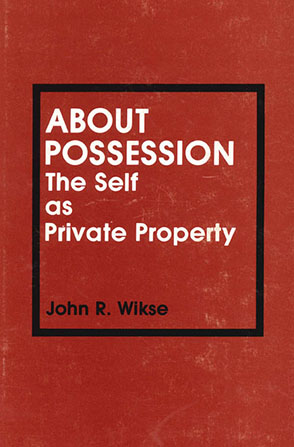 Self-concepts are shown to be internalized by modern man in metaphors of private property. Problems of personal identity are expressed in terms of the self's being lost, stolen, possessed by others, or "inauthentic." (In extreme form, these expressions become the language of schizophrenia in the Western world.) Such expressions characterize what the author calls the "behavioral" self. He uses the term "behavior" in its etymological sense, showing its derivation from be-havour, about possession.

Ideas of Nietzsche and Marx are integrated by Professor Wikse in a critique of the "idiocy"—in the etymological meaning of a private and separate social station—which underlies conceptions of freedom from Plato through Rousseau and Hegel to the 19th-century American transcendentalists and the existentialists. While recognizing the poetry in the conception of the self as private property, the author finds in its pathos an implicit recognition of humanity's basic interdependence.

John R. Wikse received an award from the Western Political Science Association for his doctoral dissertation. He received his PhD from the University of California, Berkeley, and teaches political science at Penn State.