Welcome to the April issue of Ancient News. We've been busy since this newsletter last went out, adding (click on the series name to go to the website) the Cornell University Studies in Assyriology and Sumerology (CUSAS), as well as other CDL titles, such as Before the Muses, to the website. You will also find The Joseph and Rebecca Meyerhoff Center for Jewish Studies; The Neo-Assyrian Text Corpus Project and its series, among them PNA, SAA, and SAACT; and Deo and its series, including History of Biblical Interpretation, JPTSup, and Pentecostal Commentary.

In related news, I’ll be at the Upper Midwest AAR/SBL conference on April 14 with our latest books. Drop by if you are in the area! It’s a great chance to pick up our books at 30% off!

Email list changes: One of the neat things about PSU Press is that we now have the ability to offer you specialized email lists. Go to the email sign-up page and select the series that interest you. Interested in a specific book that’s forthcoming? No problem! Sign up to be notified when it is published—and you’ll get a code for 30% off in the email, too!

Reviews! Eisenbrauns books are always getting great reviews. We’ve included snippets of some of them.

Monthly sale: In celebration of the recent publication of two new titles in the CUSAS series, we're running a 30% sale on all titles in that series now through April 30. Use the coupon code CUSAS when checking out. To see all the titles in the series, click here 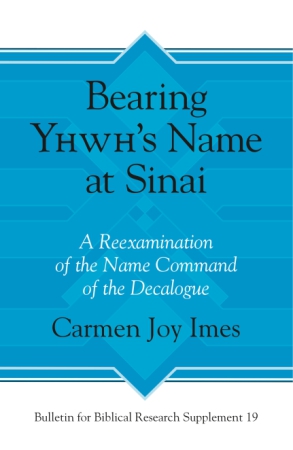 A Reexamination of the Name Command of the Decalogue

Use coupon code CJI18 to get 30% off!
The Name Command (NC) is usually interpreted as a prohibition against speaking Yhwh’s name in a particular context: false oaths, wrongful pronunciation, irreverent worship, magical practices, cursing, false teaching, and the like. However, the NC lacks the contextual specification needed to support the command as speech related. Taking seriously the narrative context at Sinai and the closest lexical parallels, a different picture emerges—one. . . (more)

Use coupon code CUSAS to get 30% off!
This volume presents a selection of 216 Old Babylonian letters as a first instalment of the Schøyen Collection’s holdings of these documents. To these have been added five letters now in another private collection, making 221 in total. The letters are edited in transliteration and translation; the cuneiform is presented mostly in the form of photographs. 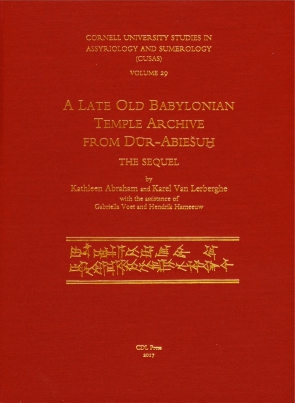 A Late Old Babylonian Temple Archive from Abi-esuh: The Sequel

Use coupon code CUSAS to get 30% off!
CUSAS 29 (2017) contains a critical edition of 206 tablets from the Rosen Collection at Cornell University and come from the archive at Dur-Abieshuh on the Hammurabi-nuhush-nishi canal. The volume constitutes a continuation of the 89 texts published previously in CUSAS 8 (2009). The archive can now be dated to between the first years of the reign of Abieshuh and the final years of Samsuditana. While the material presented in CUSAS 8 revealed that . . . (more) 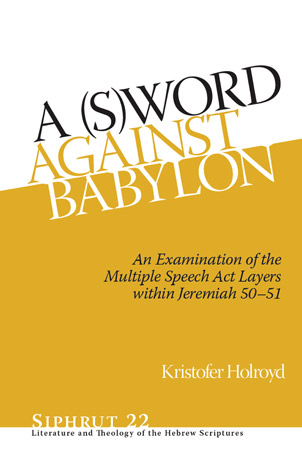 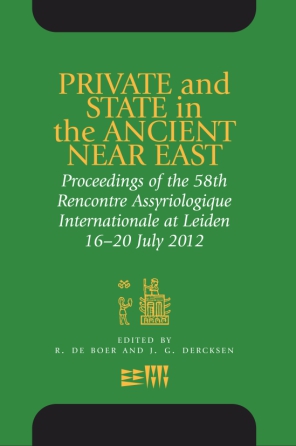 Private and State in the Ancient Near East

Proceedings of the 58th Rencontre Assyriologique Internationale at Leiden, 16–20 July 2012

In the 5 days from July 16 through July 20, 2012, more than three hundred Assyriologists from all over the world gathered in Leiden, the Netherlands, to read more than 130 papers and to contribute to a variety of workshops. Many of the papers were read in the context of several thematic workshops, some of which were related to the main theme of the conference. This volume publishes 21 of the revised essays on. . . (more) 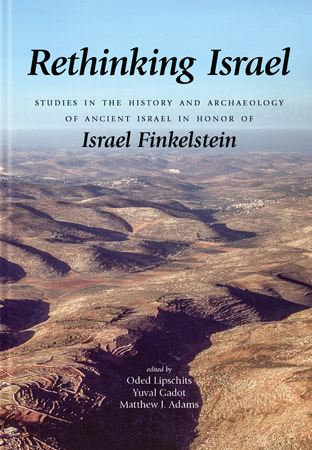 Israel Finkelstein is perhaps the best-known Israeli archaeologist in the world. Renowned for his innovative and ground-breaking research, he has written and edited more than 20 books and published more than 300 academic papers. He has served as the director of the Sonia and Marco Nadler Institute of Archaeology and is the Jacob M. Alkow Professor of Archeology in the Bronze and Iron Age at. . . (more) 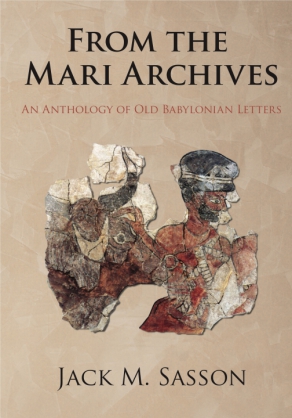 From the Mari Archives

An Anthology of Old Babylonian Letters

“Sasson knows this topic well and so the texts are thoroughly translated and footnoted. He provides the briefest of introductions, but in those few pages provides key information to situate the texts and an outline and footnotes to lead anyone into more detail should they seek it.. . . Sasson, as both an ancient Near Eastern specialist and a biblical scholar, is adept at building bridges between the two fields without overstepping what and where the connections between the two are.. . . [T]he voices of these ancient people spring to life on these pages. The texts are organized in a fashion that allows the reader to unpack various themes and every page surges with real people dealing with the issues of their day.”—Tammi J. Schneider, Claremont Graduate University in Reading Religion 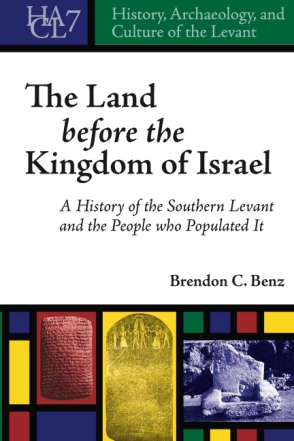 The Land before the Kingdom of Israel

“[T]he book under review has relevance . . . as it advances a series of new interpretations on Near Eastern and biblical data and readdresses old problems, and for those reasons alone, it should be said from the outset, scholars of the ancient Levant should read and attend carefully to this work.. . . To conclude, parts 1 and 2 of this study represent an important contribution to the sociopolitical history of the southern Levant during the Late Bronze Age. Of relevance, in particular, is Benz’s emphasis on the social distribution of power, its relational nature, and the continuity, from the Late Bronze to the Iron Age, of power structures and political practices.. . . [I]t offers a fresh, sophisticated, and elegantly written reappraisal of old issues and known sources.”—Emanuel Pfoh, National University of La Plata; National Research Council (CONICET) in Review of Biblical Literature, February 2018 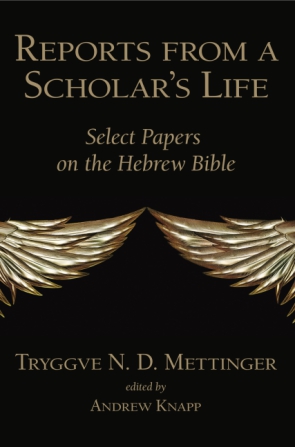 Reports from a Scholar’s Life

Select Papers on the Hebrew Bible

“Mettinger’s writing is a pleasure to read. He states his questions clearly, argues methodically and perspicuously, and offers succinct summaries. Furthermore, Mettinger admirably distinguishes between sure conclusions, probable inferences, and speculation.
As an edition, Reports has much to commend it. The volume is well structured, each of Parts I–V presenting the central theses or approaches of one of more of Mettinger’s monographs. The book therefore makes available in a single volume the chief results of Mettinger’s research, and any repetition that is present serves to reinforce these core ideas. . . . Overall, then, Reports from a Scholar’s Life proves to be highly valuable and relevant. I am convinced that this book will ensure that the remarkable achievements of this great Swedish exegete will be appreciated from many years to come.”—Cian Power, Uppsala University in Svensk Exegetisk Årsbok, 82 (2017): 285–88 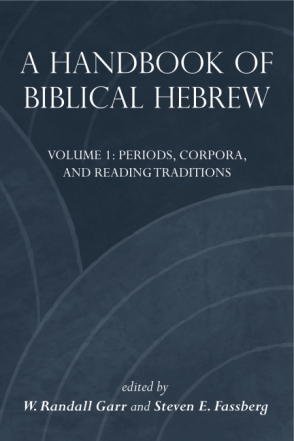 A Handbook of Biblical Hebrew

“While handbooks of Hebrew abound, this collection of essays does not stop with a technical linguistic treatment but introduces readers to the communities using and preserving these texts. The authors collectively present a nuanced history of Biblical Hebrew that traces its evolution from a spoken and written Iron Age language to a language used in more specialized contexts. The handbook‘s primary achievement is the inclusion of lesser-known religious and scholarly communities. Those who do not have access to the Encyclopedia of Hebrew Language and Linguistics edited by Geoffrey Khan et al. (Leiden: Brill, 2013) or who would like a convenient collection of articles and accompanying primary texts will find this a helpful resource. This broad perspective could fill a lacuna in the education of most students, especially those unfamiliar with the reading traditions of the Samaritans, Karaites, and modern Jewish communities.”—Alice Mandell, University of Wisconsin-Madison in Review of Biblical Literature, February 2018 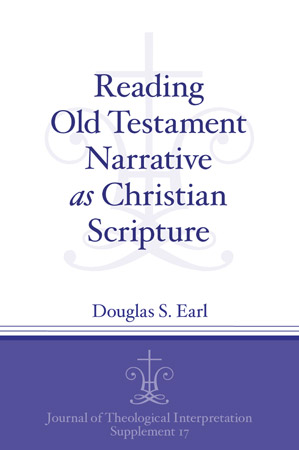 “Earl‘s work is thorough and well versed in literary theory, as well as many other disciplines. The task of reading the Bible, and narrative in particular, as Christian Scripture is a noble task. In many ways, Earl accomplishes what he has set out to do, which is to read a variety of texts that contain a variety of difficulties or problems, from a Christian perspective. Not every reader will be convinced by Earl‘s conclusions, but he will make a good conversation partner for any scholar or well-trained student seeking to read biblical narrative. . . . Reading Old Testament Narrative as Christian Scripture is a thorough work that is robust in its research and scope. In many ways, Earl will be a good reading and conversation partner to scholars and advanced students. . . . Beginning and intermediate students will . . . struggle to keep up with the breadth of literature with which Earl interacts.”—Daniel S. Diffey, Grand Canyon University, Phoenix, AZ in Journal of the Evangelical Theological Society (2018): 850–52 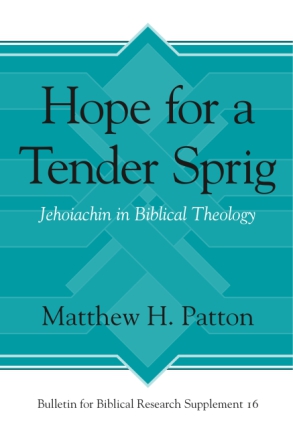 Hope for a Tender Sprig

“Matthew H. Patton has produced a weighty study of Jehoiachin in this revised dissertation. The “tender sprig” in the title comes from Ezek 17:22, commonly understood to be a messianic image. The obscurity of the reference is fitting as Patton notes on the first page of the introduction: ‘Why is there such interest in a king who was so insignificant politically and who—literarily speaking—is a rather flat character?” The answer is quickly given and sufficiently defended. . . . Hope for a Tender Sprig makes a worthy contribution to OT scholarship on Jehoiachin and biblical theology of salvation history. Though the author may overstate the significance of Jehoiachin, the exegetical work displayed throughout and the trajectory these passages provide in salvation history are valuable. This reader will incorporate many insights from this book into both teaching and preaching.”—Dean M. Erickson, Crown College, St. Bonifacius, MN in Journal of the Evangelical Theological Society (2018): 852–54 With its rich symbolism, complex narrative, and stunning imagery, the Apocalypse, or Revelation of John, is arguably the most memorable book in the Christian Bible. In Apocalypse Illuminated, Richard Emmerson explores how this striking visionary text is represented across seven centuries of medieval illustrations. . . (more) Notions of civilization and barbarism were intrinsic to Eugène Delacroix’s artistic practice: he wrote regularly about these concepts in his journal, and the tensions between the two were the subject of numerous paintings, including his most ambitious mural project, the ceiling of the Library of the Chamber of Deputies in the Palais Bourbon. Exiled in Modernity delves deeply into these themes, revealing . . (more)