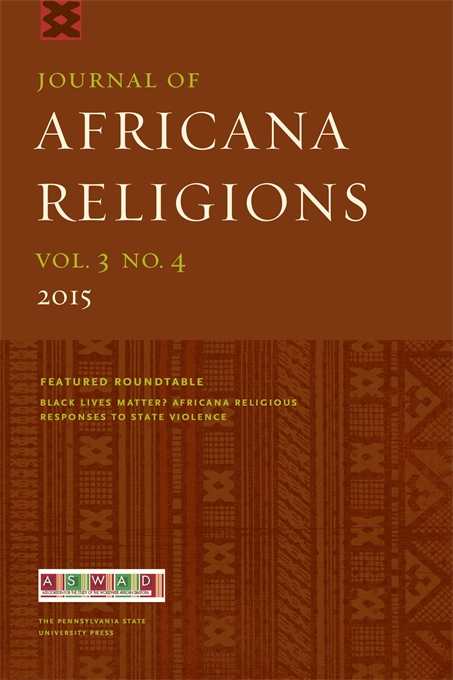 The Journal of Africana Religions publishes critical scholarship on Africana religions, including the religious traditions of African and African Diasporic peoples as well as religious traditions influenced by the diverse cultural heritage of Africa. An interdisciplinary journal encompassing history, anthropology, Africana studies, gender studies, ethnic studies, religious studies, and other allied disciplines, the Journal of Africana Religions embraces a variety of humanistic and social scientific methodologies in understanding the social, political, and cultural meanings and functions of Africana religions.

The chronological scope of the journal is comprehensive and invites research into the history of Africana religions from ancient to contemporary periods. The journal’s geographical purview is global and comprises Africa, the Americas, Asia, the Atlantic islands (such as Cape Verde and São Tomé), the Caribbean, and Europe. The journal is particularly concerned with publishing research on the historical connections and ruptures involved in the spread of Africana religions from within and beyond Africa. Emphasizing the historical movement or spread of Africana religions and the dynamic transformations they have undergone underscores the nuanced, complex history of these religions and transcends the essentializing gestures that have hindered previous generations of scholarship. For this reason, we encourage authors to examine multiple dimensions of Africana religions, including the relationship between religion and empire, slavery, racism, modern industrial capitalism, and globalization.

Call for Proposals: The Great Debates in Africana Religious Studies

What are the great debates in the academic study of Africana religions? The Journal of Africana Religions invites 150-word proposals for a special issue on the simmering, essential, and revelatory debates in our field. Such debates may be implicit or explicit. Prospective authors will define and analyze the debates that they think are worth exploring.

The modern European study of religion was born in the colonial and imperial encounters among Africana people, colonial officials, and imperial theorists such as E. B. Tylor, and Africana religions not only provided raw data for the making of religious studies but also constituted a discourse whose terms became essential to various modern fields of knowledge. Since then, debates about Africana religions have been essential to the modern humanities and social sciences and to their application beyond the academy. See, for example, the notable brouhaha between Melville J. Herskovits and E. Franklin Frazier on whether African-descended people in the Americas retained African cultural traits, which became important to public policy-making, national identity, and ethnic solidarity.

What twenty-first century debates are essential in the study of Africana religions? Illustrative questions might include:

1. Are Africana religions an impediment or asset to social development, gender equity, and political liberation? Outline the major scholarly positions on this question.

2. Does the study of Africana religions sometimes privilege Orisha devotion or other indigenous religions as authentically African, even as the vast majority of Africana peoples practice Christianity or Islam?

3. What is the state of the field in understanding the concept of the Africana religious diaspora—how has this debate changed over time, what are its main arguments now, and where does the debate seem to be going?

4. The field is often divided along disciplinary lines. What debates are explicit or implicit in theological, anthropological, sociological, historical, literary, and comparative religious accounts of Africana religions?

5. What are the disagreements among scholars on the continent, in Europe, Asia, and the Americas, and how do geography and power shape the very definition of what counts as an academic argument?

Proposals are due on February 15, 2019 to . Final essays of 5,000 words in length are due on August 15, 2019. All essays will be peer-reviewed. Questions? Email the journal or tweet @jafricanarelig.

If you would like to submit an article to JOAR please visit http://www.editorialmanager.com/joar/ and create an author profile. The online system will guide you through the steps to upload your article for submission to the editorial office.

Authors interested in contributing short review essays (of two to five recent works) and ideas for round-table discussions should contact the editors before submitting a manuscript. Short review essays and round-table comments, which are not peer reviewed, should be approximately 1,500 to 3,000 words in length. Abstracts for such pieces should be no more than 50 words long.

Manuscripts must be submitted as a Microsoft Word document (Times New Roman font, size 12, flush left, double spaced). All manuscripts must follow the current edition of the Chicago Manual of Style and should use endnotes. Do not use in-text citations and do not include a bibliography. In order to maintain an anonymous peer-review process, manuscript files should not include the author’s name, and citations to the author’s work should be redacted. For more information about the journal’s style, please download our style guide.

Materials submitted to Journal of Africana Religions (JOAR) must not have been previously published nor submitted for publication elsewhere while under review by JOAR editors. All manuscripts accepted are subject to editorial modification. Questions may be sent to the editors at journal@africanareligions.org.