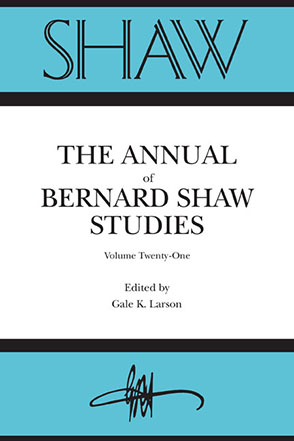 The next two contributors, Stanley Weintraub and Andrea Adolph, examine the Shaw/Virginia Woolf relationship. Weintraub focuses on those occasions when their respective lives touched each other, what their feelings for each other were, and how those occasions were obliquely woven into Shaw's plays, most notably Heartbreak House. Professor Adoph argues that in Woolf's only dramatic text, Freshwater: A Comedy, she was conforming to the traditional theatrical mode of the day, dominated, of course, by Shaw, but that she subverted his traditional literary depiction of paternity as, for example, the paternity dramatized in Major Barbara.

Sidney Albert and Bernard Dukore provide unique perspectives on reading Major Barbara. Albert shows how John Bunyan's The Pilgrim's Progress serves as Shaw's source for Barbara's progress toward enlightened understanding. Dukore, focusing on the perspective of the familial relationship within the play, concludes that Shaw's dialectic gives the kids the future and not the dad. It will be the next generation, not Father Undershaft, who will determine where society will go next.

Julie Sparks and Martin Bucco approach Shaw from a comparative basis, juxtaposing him with two American writers, contemporaries of Shaw, Mark Twain and Sinclair Lewis, respectively. Sparks explores the commonality that exists in Shaw's and Twain's thinking about evolution, namely, their heretical visions of a post-Darwinian Eden. Both viewed conventional Christianity iconoclastically, but both arrived at different conclusions about human origin and destiny, a view Sparks describes as emanating from the deist-pessimist-evolutionary-determinist perspective versus the mystic-optimistic-creative-evolutionist perspective, or the Personal Godhead versus the Impersonal Force. Professor Bucco enumerates the many references Sinclair Lewis makes to Bernard Shaw throughout his writings, both prose and fiction, to underscore the American novelist's admiration for the Irish playwright, both recipients of the Nobel Prize for Literature.

The final two contributors to SHAW 21, Rodelle Weintraub and William Doan, provide the readers with distinctive perspectives on John Bull's Other Island and The Doctor's Dilemma, respectively. Weintraub recasts the play into a dream sequence whereby Doyle's dream becomes an artifice for problem solving. Implied within Father Keegan's lines in the play, "Every dream is a prophecy: every jest is an earnest in the womb of Time," is the resolution of Doyle's problem with Nora, the girl he had left behind, and of the dream of modernizing Roscullen. Doan suggests that in The Doctor's Dilemma Shaw uses the idea of unconsummated adultery to argue for the efficacy of art over science. In the conflict between the artist and the scientist, the latter plans to have the artist's muse. In the end, not only is he deprived of the wife but also of the works of art themselves and the spirit that animates them. SHAW 21 also includes three reviews of recent additions to Shavian scholarship as well as John R. Pfeiffer's "Continuing Checklist of Shaviana.”

2. EPISTOLARY FOLLIES: IDENTITY, CONVERSATION, AND PERFORMANCE IN THE CORRESPONDENCE OF ELLEN TERRY AND BERNARD SHAW 27

edited by Jeremy and Nicole Wilson) 163

Theater: A Director's Perspective and a Playwright's Thematic

A CONTINUING CHECKLIST OF SHAVIANA 179