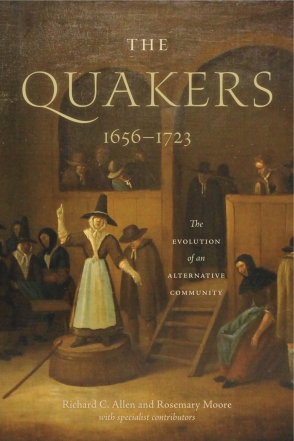 “It is welcome, valuable, and stimulating, and a necessary companion for anyone inquiring into this dynamic period of our faith community.”—Brian Drayton, Friends Journal

This landmark volume is the first in a century to examine the “Second Period” of Quakerism, a time when the Religious Society of Friends experienced upheavals in theology, authority and institutional structures, and political trajectories as a result of the persecution Quakers faced in the first decades of the movement’s existence.

The authors and special contributors explore the early growth of Quakerism, assess important developments in Quaker faith and practice, and show how Friends coped with the challenges posed by external and internal threats in the final years of the Stuart age—not only in Europe and North America but also in locations such as the Caribbean. This groundbreaking collection sheds new light on a range of subjects, including the often tense relations between Quakers and the authorities, the role of female Friends during the Second Period, the effect of major industrial development on Quakerism, and comparisons between founder George Fox and the younger generation of Quakers, such as Robert Barclay, George Keith, and William Penn.

Accessible, well-researched, and seamlessly comprehensive, The Quakers, 1656–1723 promises to reinvigorate a conversation largely ignored by scholarship over the last century and to become the definitive work on this important era in Quaker history.

“It is welcome, valuable, and stimulating, and a necessary companion for anyone inquiring into this dynamic period of our faith community.”—Brian Drayton, Friends Journal

“It is important reading for experienced scholars of the period’s religious history, but will also be vital for post-graduates looking for up-to-date scholarship on the history of dissent, undergraduates seeking a handle on complicated political, social and religious matters, and a general readership with a keen interest in history. It is a tribute not just to the quality of the individual chapters, but to the work of Allen and Moore in ensuring consistency in tone and content, that so many groups will be so well served by what will surely be received as the definitive history of this period of Quaker history for the coming generation.”—Adam Morton, Journal of the Friends Historical Society

“The Quakers, 1656–1723 is a really significant contribution to Quaker studies scholarship and an impressively coherent collection of some of the best and latest thinking about the enigmatic ‘second period.’ This book offers us a clear way through the nuances and complexities of a period of massive change for the Quaker movement.”—Ben Pink Dandelion, author of The Quakers: A Very Short Introduction

“A new, up-to-date history of early Quakers, the first in over a century, is particularly welcome. Quakers have been the subject of many recent specialized studies, but this new work sets out to address some of the latest concerns: the role of women, changes in Quaker authority and theology, the decline in religious radicalism and the growing compromises with 'the world,’ and the engagement of Friends in Europe and America.”—David Wykes, Director of Dr Williams’s Library, London

“This is an important book that revitalizes our understanding of a neglected period of Quaker history. The book’s focus on the Atlantic world is particularly welcome, and this will be an invaluable resource for historians of early modern religion in both Britain and America.”—Andrew C. Thompson, author of George II: King and Elector

“This is an exceptionally authoritative, balanced, vivid, insightful, and painstakingly crafted account of Quakers from 1656 to 1723, during which time Quakers consolidated their organization, combated schisms, and suffered persecution. The first such one-volume narrative with ample coverage of the maturing Quaker community on both sides of the Atlantic, this fascinating book chronicles the final years of influential and charismatic founders (George Fox, George Whitehead), as well as momentous achievements by newly convinced Quakers (William Penn, Robert Barclay) and the ministry of leading Quaker women (Margaret Fell, Dorothy White).”—Stephen W. Angell, coeditor of The Cambridge Companion to Quakerism

“The period from 1656 to 1723 has been one of the great voids for historians of Quakerism. Now Rosemary Moore and Richard Allen have provided us with what will certainly prove to be, for a generation, the definitive history of Quakers and Quakerism in this period. Based on wide-ranging research in sources both Quaker and non-Quaker and fully in dialogue with the scholarship on Quakerism, Dissent, Stuart England, and the early Atlantic world, this book is one of the most welcome, and important, works on Quaker history to appear in the twenty-first century.”—Thomas D. Hamm, author of The Transformation of American Quakerism: Orthodox Friends, 1800-1907

Rosemary Moore is the author of The Light in Their Consciences: The Early Quakers in Britain, 1646–1666, also published by Penn State University Press.