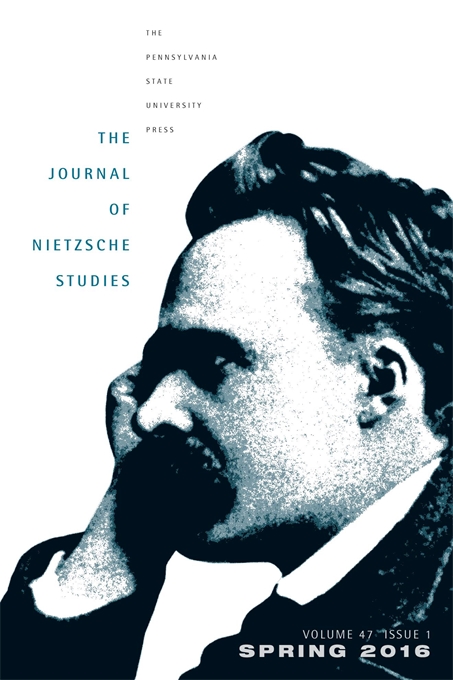 The Journal of Nietzsche Studies has become indispensable reading for all those who take Nietzsche seriously. It publishes the best work in continental and Anglo-American thought. In my experience every issue contains more than one article that forces one to reevaluate judgments that had been thought firm. —Tracy Strong, University of California, San Diego

The Journal of Nietzsche Studies is a peer-reviewed, English-language journal with an international readership, dedicated to publishing the best philosophical scholarship on the work and thought of Friedrich Nietzsche. The journal welcomes submissions that explore Nietzsche’s relevance to contemporary philosophical problems, as well as those deploying, and contributing to, the latest historical and philological resources.

Manuscripts intended for consideration should be electronically processed, double-spaced, with endnotes and a list of works cited. Manuscripts should not exceed 30 pages in length and should be prepared for blind review (i.e. the author's name and institutional affiliation should not appear in the manuscript). Electronic submission are preferred and should be uploaded to http://www.editorialmanager.com/jns/.

Roman numerals denote the volume number of a set of collected works or standard subdivision within a single work, and Arabic numerals denote the relevant section number. In cases in which Nietzsche's prefaces are cited, the letter P is used followed by the relevant section number, where applicable. When a section is too long for the section number alone to be useful, the page number of the relevant translation is also provided. In the cases in which the Kritische Gesamtausgabe (KGW) and KSA are cited, references provide the volume number (and part for KGW) followed by the relevant fragment number and any relevant aphorism (e.g., KSA 10:12[1].37, p. 1 refers to volume 10, fragment 12[1], aphorism 37, page 1).

The following abbreviations are used for citations of Nietzsche's writings:

BGE = Beyond Good and Evil

BT = The Birth of Tragedy

CW = The Case of Wagner

DS = "David Strauss, the Confessor and the Writer"

FEI = "On the Future of Our Educational Institutions"

GM = On the Genealogy of Morality/Morals

HH = Human, All Too Human

HL = "On the Use and Disadvantage of History for Life"

PTAG = Philosophy in the Tragic Age of the Greeks

TL = "On Truth and Lies in an Extra-Moral Sense"

UM = Untimely Meditations (when referenced as a whole)

WP = The Will to Power

WS = The Wanderer and His Shadow