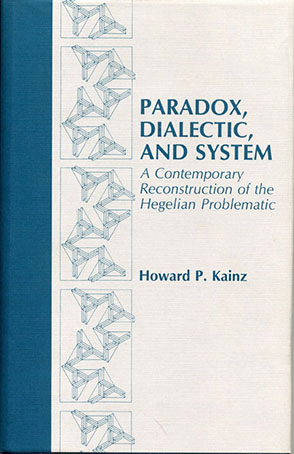 While paradox is generally considered by philosophers and logicians as something to be avoided, Kainz's study investigates the possibility that it is an important and even indispensable element of constructive thinking in philosophy as well as other disciplines. Paradox, Dialect, and System is this a contribution not only to Hegel scholarship but to philosophy itself. It will be of particular interest to this concerned with the differentiation of dialectical and nondialectical philosophical systems and with the prevalence of paradox in literature, religion, and contemporary physics.

Howard P. Kainz is Professor of Philosophy at Marquette University. He has been a National Endowment for the Humanities fellow (1977–78) and a Fullbright fellow in Germany (1981–82 and 1987–88). He is author of Hegel's Philosophy of Right, with Marx's Commentary (1974); Hegel's Phenomenology, Part I: Analysis and Commentary (1976); Hegel's Phenomenology, Part II: The Evolution of Ethical and Religious Consciousness to the Absolute Standpoint (1983); and a number of articles on Hegel.