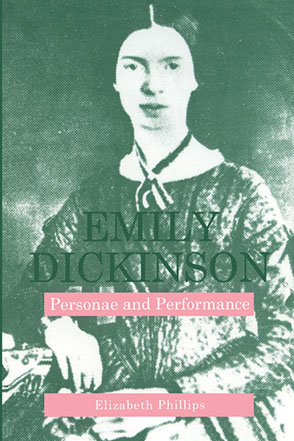 “In this beautifully written, refreshingly insightful explication of Dickinson’s work, Phillips argues that the Amherst poet . . . ‘assumed many personae,’ and that ‘the experiences in the poems are often transformations of episodes in the lives of personal friends, literary characters, and historical figures for whom a fictive I is only a convenient term.'”Nineteenth-Century Literature

Giving us a new sense of Dickinson’s ways of being in her world, this book traces the perceptions of that world in the poetry and contributes to our pleasure in the performance of a virtuoso. Elizabeth Philips shows the imaginative uses the poet made of her own life but also the verifiable use of her responses to others—personal friends and relatives, historical and literary figures, and “nature’s people”—in the play of language that registered her insights. The book is not a biography; it considers, instead, evidence of the poet’s character and her character as a poet. Dickinson emerges as less self-enclosed and enigmatic than she is frequently assumed to be.

Phillips is among those who reject the view of the poet as a psychologically disabled, perhaps mad woman who withdrew into herself because of some devastating emotional experience, presumably love that went wrong. She questions the common desire to connect the texts with a trauma for which the center is missing. While Dickinson pursued the vocation of a poet, she was actively engaged in much else that required stamina and resourcefulness. A woman in a 19th-century household, for instance, was not a woman of leisure; Dickinson bore a heavy share of domestic duties and familial responsibilities throughout most of her life. The crisis she experienced during the early 1860s, in a cluster of responses to the Civil War, coincided with the onset of her difficulties with her eyes. Suffering from exotropia and photophobia, she never fully recovered and gradually withdrew into the less severe light of the house in Amherst. She continued to care for those close to her and to write both letters and verse.

From the perspective of Dickinson’s maturity and resilience, we also see her gift for depicting and dramatizing episodes in a manner that gives the illusion of their being autobiographical whether they are or not. Dickinson was, however, an actress who changed roles and points of view as readily as she experimented with poetic genres. Analyses of her various personae (or “supposed persons”) for dramatic monologues in the Browning tradition—which enabled the poet to represent a range of experiences different form her own—serve to dispel much of the confusion that has surrounded her in the last century. Rather than searching for an illusive absent center, Phillips scrutinizes in a most revealing way the poet’s reading, appropriation, and command of materials from the Brontës, George Eliot, Hawthorne, the Brownings, Shakespeare, and the Southey for personae that introduce us to a Dickinson heretofore hardly glimpsed. A central vision of the study is the poet as a biographer of souls.

“In this beautifully written, refreshingly insightful explication of Dickinson’s work, Phillips argues that the Amherst poet . . . ‘assumed many personae,’ and that ‘the experiences in the poems are often transformations of episodes in the lives of personal friends, literary characters, and historical figures for whom a fictive I is only a convenient term.'”Nineteenth-Century Literature

“Although the intention of this book is not strictly biographical, the life of Dickinson is vividly portrayed and realistically interpreted. Instead of the stereotypical image of Emily Dickinson as the New England Nun, we see instead a real woman living quietly and working hard at home, full of concern for those she loves, deeply affected by the issues of her day, interacting intensely with the world around her through poetry and letters. Phillips challenges many of those interpretations of Dickinson's life and poetry that have become almost standard and universally accepted . . . . This is an important book for the Dickinson scholar who will recognize immediately the debates and controversies among Dickinson scholars that Phillips gracefully refers to and very adequately challenges.”Choice

Elizabeth Phillips is Professor Emerita of English at Wake Forest University. She is the author of Marianne Moore (1982).