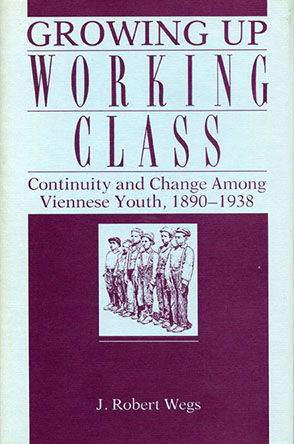 In examining the way life was actually lived, this book deals primarily with the children of manual laborers, but includes the children of other socially disadvantaged groups in the working-class districts. It analyses the social dimensions among laborers and those immediately above them, such as small-scale shopkeepers. With the view that there is not just one working-class culture but many, it explains the diversity of the working-class experience rather than concentrating only on the most impoverished stratum within it. Wegs argues that much of the working class had a fuller and richer life than is depicted in existing literature. The length of the period covered makes it possible also to draw comparisons and identify long-term trends. Separate chapters are devoted to topics such as everyday life, schooling, work, and sex and marriage.

By showing how working-class youth were isolated within primarily working-class areas but still tied to the dominant culture through the schools, social workers, and the Social Democratic subculture, the book adds an important dimension to the study of the working class. It provides a fuller dimension to the study of the working-class youth by dealing with young women as well as men, and with major arguments concerning sexual divisions at work, in the family, and in society. It examines the subordinate position of women in working-class culture but also notes their significant role in the family and in society.

Wegs’s study will be of interest to students of European history and social history, particularly those interested in the working class, issues of adolescence, and the family.