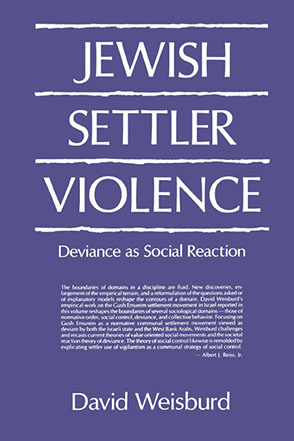 This book examines the similarities between deviant behavior and society's reactions to deviance. It examines the deviance of Jewish settlers who themselves advocate or participate in law-violating actions. It describes and explains the social organization of deviant social controls. Rather than centering our view of the normative process in the general society, it focuses upon Jewish settlers who evade and resist the rules and laws of that society in the name of "higher" laws.

A detailed examination of settler rationalizations of vigilante violence against Arabs provides an unusual glimpse of community support for law violations in these areas. Unique quantitative data allow for the first major multivariate analysis of vigilante attitudes and behaviors.

Jewish Settler Violence provides an innovative and thought-provoking approach to violence that is rationalized and legitimized with reference to norms and values. It illustrates the importance of broadening concerns with crime and deviance to include "altruistic" law violations that have more in common with the complex decision-making processes of societal reactions than the routine character of most deviant behavior. It also provides a set of sobering implications for the future of Jewish settler violence. This research suggests that vigilantism and antigovernment violence will increase at the same time that the Israeli government will find it increasingly difficulty to respond to and control settler deviance.

David Weisburd teaches at the Graduate School of Criminal Justice of Rutgers University.