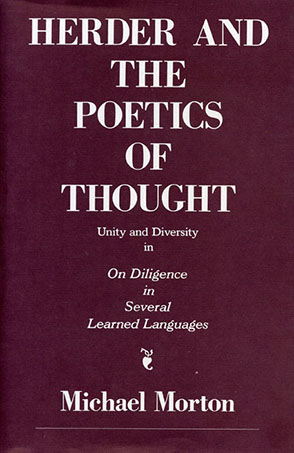 Morton offers the first extended examination of Herder's distinctive philosophical and rhetorical idiom. He argues that Herder's often difficult style is not the mere hindrance to understanding it has often been taken to be, but rather that the substance of his thought is in fact integrally bound up with precisely how he constructs the texts intended to express it. The meaning of a Herderian text, Morton maintains, is conveyed both through the overt content of its propositions and, at the same time, through the various poetic techniques by which they are woven together. Interpretation of Herder's work thus depends on looking not only at what the words say (or appear to) but also, as with any literary text, at what they actually do—or, in the terms of the dialectic to which Morton refers throughout the book, at the gestural no less than the discursive dimension of the text.

Morton argues that the essay represents the essential key to the shape and direction of Herder's thought at large. In so doing, he provides a basis for a reassessment of Herder's position in intellectual and literary history generally, with particular reference to his role in the development of German Idealism, his key contribution to the foundations of Romanticism, and the impetus provided by his work to the rise of both linguistic and historicist paradigms of thought.

This work is of importance to scholars both in German studies and in other fields working with the eighteenth and early nineteenth centuries, as well as to all those concerned with modern intellectual history, philosophy of language, and philosophy of history.

Michael M. Morton is in the German Literature Department at Duke University.