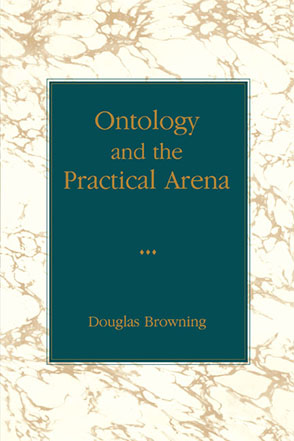 The book is divided into two parts. The first is devoted to consideration of the overall shape of the ontological enterprise as a process of moving from the pole of initial ontological questioning toward the pole of the provision of an acceptable system. While each of these two poles is discussed in turn in some detail, it is the mediating process of inquiry and construction, of "doing" ontology, to which Browning devotes most of his attention. His examination of this process reveals serious difficulties, one of which, he argues, provides the most serious threat to the acceptability of ontology as a viable project. This difficulty centers on the issue of discovering a manner of access to reality that is sufficiently favored over the others to provide a cue for the constructive imagination.

In the second part, Browning proposes a way of overcoming this difficulty. After presenting a general argument for the primacy of the practical stance in our lives, he makes and defends a number of proposals regarding the general structure of the arena of acting that this stance discloses. The book ends by showing the extent to which an appeal to this structure would ensure, not the success, but the viability of ontological investigation.

Douglas Browning is Professor of Philosophy at the University of Texas, Austin.