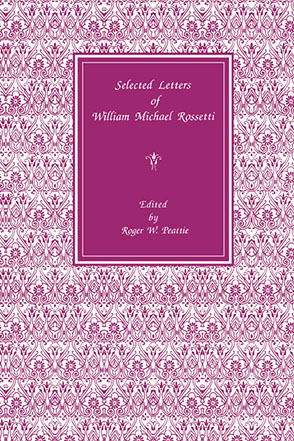 More recently, Professor W. E. Fredeman has written of him as "among the P.R.B.s... almost the only man of action," and the essential figure in the founding of the Pre-Raphaelite Brotherhood and its magazine, The Germ. The publication of this edition of more than six hundred of his letters (most of them previously unpublished), to such leading literary and artistic figures as Holman Hunt, Ford Madox Brown, Dante Gabriel and Christina Rossetti, Browning, Swinburne, Whistler, and Whitman, demonstrates convincingly the range and quality of his friendships, his active involvement in the cultural life of Victorian England, and the complexity of his character. The letters also offer a detailed account of his powerful advocacy of the work of Blake and Shelley, of Swineburne and Whitman among his contemporaries, and, after their deaths, of Dante Gabriel and Christina Rossetti.

Throughout his life Rossetti was intensely aware of the political and social events of his time, both in Europe and the United States, and the letters contain numerous references to the Crimean, Franco-Prussian, and Boer wars, the Paris Commune, the American Civil War, women's suffrage, and Italian unification. The letters have been extensively annotated, making use of the hundreds of letters by Rossetti not included in the edition, his twenty-volume diary, and the thousands of letters to him preserved in the Angeli-Dennis Papers at the University of British Columbia.

Roger W. Peattie is Professor of English at the University of Calgary.