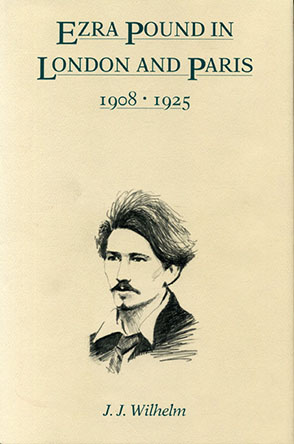 “Wilhelm’s book should remain the authoritative treatment of this period of Pound’s life for some time to come.”—Stuart Y. McDougal, University of Michigan

This book systematically traces Pound's career from his arrival in London in 1908 to his departure from Paris in 1924, emphasizing his activities but also describing his writings and relating them to his life. Avoiding either vitriolic condemnation or pious hagiography, Wilhelm examines Pound’s strengths, especially his influence on other artists (including painters and sculptors); he also deals with Pound’s weaknesses, as manifested particularly in his stormy encounters with people like Amy Lowell.

Unlike recent popular biographies, this work offers the reader much new material about Pound’s life, notably his amatory adventures with Nancy Cunard and Iseult MacBride Stuart, his musical relations with Katherine Ruth Heyman and Walter Morse Rummel, and his friendships with artists such as Francis Picabia, Henri Gaudier-Brzeska, and Wyndham Lewis. The Paris years from 1921 to 1924 are presented in a novel way through the dynamic interplay in Pound’s life—both as a diary listing important events and as a series of constellations of artists, musicians, writers, and lovers.

The book concludes with Pound’s eventual disenchantment with Parisian life, his writing of his first Cantos, and his removal to Mussolini’s Italy, a land that would greatly influence his tragic later years.

“Wilhelm’s book should remain the authoritative treatment of this period of Pound’s life for some time to come.”—Stuart Y. McDougal, University of Michigan

J. J. Wilhelm is Professor of Comparative Literature at Rutgers University and author of several works on poetry and Pound, including The American Roots of Ezra Pound (1985) and Ezra Pound in London and Paris, 1908–1925 (Penn State, 1990).