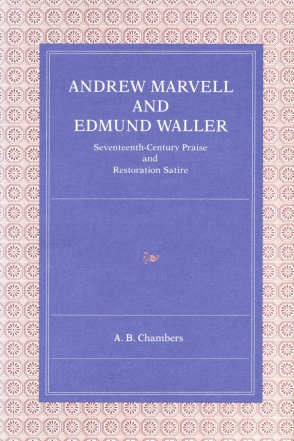 Chambers situates important poems by both authors within historical and literary contexts as an aid to elucidating both meaning and poetic achievement, but he also pays close historical attention to details of language, syntax, and metrics that supply meaning. He provides a significant new reading of Marvell's "To His Coy Mistress," while also situating the poem within Marvell's poetic and political careers. He also presents a fuller, more accurate picture of the period by taking into account the conceptual and poetic problems that both authors necessarily confronted and by examining the curiously inverted parallelism of the strategies that they employed in addressing those problems.

A.B. Chambers is Professor of English at the University of Wisconsin, Madison. He is the editor of The Works of John Dryden, Volume 4 (1974).