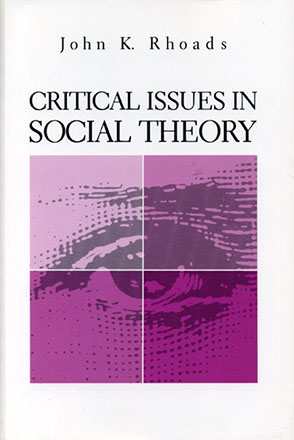 Instead of being just another history, or another classification of theories, Rhoads's four-part model allows him to focus attention on issues that remain at the core of sociological theory today. First, Rhoads analyzes the controversy over positivism as the proper methodological model for the study of human society. Is there one science, of which sociology is a branch, or do the peculiarities of sociology's subject matter require a modification of the scientific method borrowed from the natural sciences? Rhoads next considers the relationship of individuals to society and its structures. Does society have a mode of existence distinct from its members, or is it merely an abstraction derived from the characteristics of individuals? Third, a discussion of social order raises the question of whether social order is the consequence of rules and their underlying moral values, or the product of continuous construction based on self-interest. Finally, the relative importance of consensus and conflict in social relationships is addressed. Is society better understood as a community united by beliefs, values, and rules, or is the social dynamic of continual conflict over beliefs, values, and rules more fundamental? In coming to grips with these issues, the author in some instances takes sides and in others arrives at a synthesis of diverse perspectives. In the final chapter he points to the limitations on the possibility of rational action that come to light in the clashes over these basic issues.

John Rhoads is Professor of Sociology at Northern Illinois University.