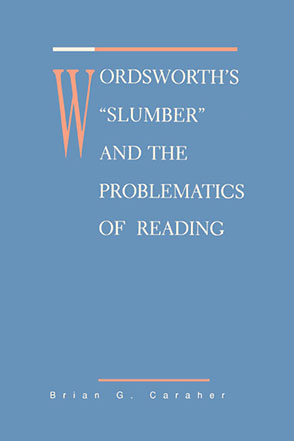 Wordsworth’s “Slumber” and the Problematics of Reading engages in detail both the nature and the implications of what can be called literary pragmatics. It offers a new interpretation of Wordsworth’s “A slumber did my spirit seal” as well as “Strange fits of passion” and “She dwelt among untrodden ways,” making a major contribution to an ongoing interpretive debate concerning the first poem and the theoretical issues to which is gives rise. It also provides new ways to contextualize Wordsworth’s so-called Lucy poems as well as Coleridge’s appropriations of them in 1799.

Caraher analyzes solipsism and strange fantasies of death as they surface in readings of Wordsworth’s lyric and provides critical examinations of the rhetoric, assumptions, and evidences of reading on the part of many of Wordsworth’s most famous critics. He then makes a strong case for the theoretical viability of the work of John Dewey and Stephen Pepper for the field of literary studies, especially for theories of literary reading, theories of evidence, and the logic of literary inquiry.

Caraher’s identification of the “problematic” of Wordsworth’s poem gives direction to a powerful inquiry into the poem’s meanings, its reader’s judgments, and its culture’s pathologies. He makes a significant contribution to the ongoing discussion concerning pragmatism in literary studies and to the understanding of Wordsworth and the theory of reading.