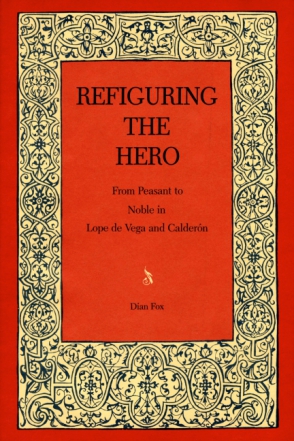 The Spanish dramatists Lope de Vega and Pedro Calderón de la Barca, near contemporaries of Shakespeare, are hailed by Hispanists as democrats at heart for making heroes, in both the literary and the positive moral sense, of peasants. Spanish drama is alleged to be the first literature in the Western world to find the common man worthy of heroic status. Refiguring the Hero reevaluates the place of the canon of Spanish Golden Age drama within its European context.

The book discusses European literary heroism through the seventeenth century,with particular attention to the Spanish or moral enlightenment were essential characteristics of a hero. However, the protagonists of Spanish "peasant honor" plays do not fit into this heroic tradition. The peasant often murders a nobleman who has offended his honor, and is rewarded by the reigning monarch. The peasants gain official approval by misrepresenting the events leading up to the murders. The generous kings, in their turn, are historical figures known for their failures.

While most scholars approaching Spanish Golden Age drama regard these plays a s socially subversive or revolutionary, Dian Fox contends that they are consistent with other contemporary European national dramas in reserving heroism in serious works for socially superior characters. She challenges the "democratic" view of the peasant triumphing over the nobleman as heroic and shows that political and social developments since the seventeenth century have enhanced the sympathy with which modern readers regard the violent acts of the peasants in these plays.

Dian Fox is Associate Professor of Spanish and Comparative Literature at Brandeis University and author of Kings in Calderón: A Study in Characterization and Political Theory (1986).