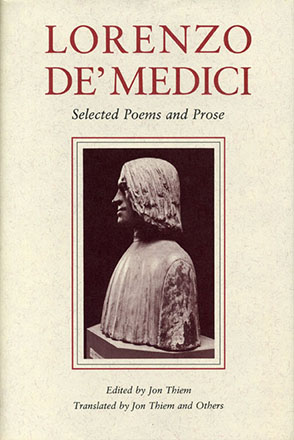 Lorenzo de’Medici (1449-92) was the ruler of Florence and the principal statesman of his time. A contemporary of Columbus, Lorenzo is hardly known in the English-speaking world as a major Quattrocento writer, author of a large and varied body of poetry as well as an important literary treatise. His poetry and patronage were instrumental in renewing the vernacular literature of his age after a period of stagnation.

That Lorenzo’s literary writings were for the most part never translated is a fascinating curiosity of history, attributable to the irreverent, bawdy subject matter of many of his poems, objections to his authoritarian politics, and the unconventional features of his poetic realism. Yet Lorenzo is now seen as the most interesting exponent of the cultural renaissance that he encouraged. His longer poems in particular reveal the central concerns, everyday activities, and favorite ideas of his day. No other Florentine writer succeeds in capturing as he does the beauty, seasonal changes, and rhythms of life of the Tuscan countryside. His poetic realism is that which sets him apart from his age, yet makes him such a vivid portrayer of it. The availability of his works in English will serve to modify and enlarge our conception of the Florentine Renaissance.

Jon Thiem is Professor of English and Comparative Literature at Colorado State University. He is the co-translator of History, Philosophy, and Culture in the Young Gramsci (1975) and author of numerous essays published in Comparative Literature, The Journal of the History of Ideas, and Cadmos.

The Inventory of the Palazzo Medici in 1492

Edited and translated by Richard Stapleford