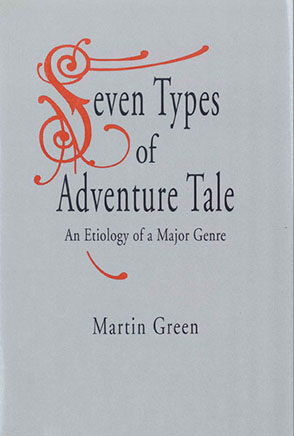 Seven Types of Adventure Tale studies widely read and influential adventure tales of the eighteenth through the twentieth centuries in the respectable literary forms. Some of the authors considered are Dumas, Scott, Defoe, Cooper, Verne, Buchan, Kipling, Twain, and Chandler. These stories, though adapted and copied innumerable times and read in their native languages and in translation throughout the Western world, have been largely neglected by literary theorists. Green offers a way to take the adventure tale seriously by positioning these stories within a new theoretical framework.

Green places the tales in seven categories organized according to the type of central character in each story. The first category is the Robinson Crusoe story, which portrays the myth of entrepreneurial capitalism and "modern" or postfeudal politics. This story has appeared in one hundred well-known versions, including The Swiss Family Robinson and Lord of the Flies, since Defoe published his version.

The second category is the Three Musketeers story, mythifying the birth of the French state and, by extension, the birth of other nation-states. The third is the Frontiersman story, originally about American history but a powerful myth far beyond U.S. borders. The fourth, the Avenger story, is tied to the myth of an avenging return by Napoleon to France, but more generally to a threat to the bourgeois ruling classes of the nineteenth-century Europe. The fifth is the Wanderer story, which relates to escaping from social discipline but also to spying and disguises and crossing frontiers of all kinds. The sixth, the Saga story, is a revision of the Icelandic and Teutonic sagas and reflects the myth of resurgent Germany after its unification in 1870. And the seventh category, more specific to the twentieth century, is the Hunted Man story, in which an individual hero is pitted against social juggernaut, such as the state, the Mafia, or a giant corporation.

Seven Types of Adventure Tale is the second volume of a three-volume study of adventure by Green that began with The Robinson Crusoe Story.