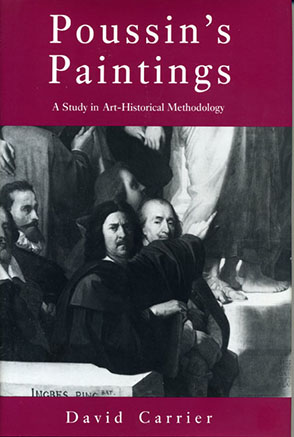 Carrier examines the traditional approaches of Poussin scholars, noting the limitations of their views and showing how they not only shape our image of the artist but also restrict out ability to properly grasp his concerns. Carrier also considers the important conceptual claims of connoisseurs and reveals how their work invokes an implicit theory of Poussin's development.

He extends his analysis to a discussion of Poussin's landscapes, which have a different and more important place in his development than the older accounts claim.

Carrier places Poussin within the artistic and political culture of seventeenth-century Rome. He asserts that artists of the time were concerned with the problem of belatedness and that Poussin attempted to return to the tradition of the High Renaissance, reworking images from that tradition in response to his own visual culture. Carrier argues that Poussin's art is thus best understood as a response to that setting for baroque art, and he relates Poussin's work to the later tradition of French history painting.

David Carrier is Professor of Philosophy at Carnegie Mellon University and author of Artwriting (1987) and Principles of Art History Writing (Penn State, 1991).