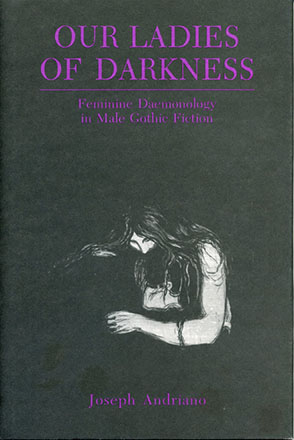 Our Ladies of Darkness opens with a question raised by Nathaniel Hawthorne in his 1835 sketch "The Haunted Mind": "What if the fiend should come in women's garments, with a pale beauty amid sin and desolation, and lie down by your side?" Joseph Andriano boldly attempts to answer this question by examining some fifteen texts in which such a haunting occurs, including Poe's "Ligeia," Hoffmann's "The Sandman," Irving's "The Adventure of the German Student," Cazotte's "Le Diable amoureux," and Aickman's "Ravissante." His close reading of the individual texts leads to illuminating intertextual parallels, drawn through an archetypal perspective, which creates coherence among the many recurring image-patterns and motifs.

The haunting is an incursion into the male ego's dominion: the female demon is seen as a usurper or intruder; she inhabits and insidiously attempts to exert her influence, to feminize the male. These demands include the impelling need to acknowledge male femininity, or androgyny. Ignoring this drive, which Andriano views as instinctual and archetypal, often results in what the Romantics called "nympholepsy," and what Carl Jung called "anima-possession."

Although the notion that men need to acknowledge their own femininity is not new, the realization that doing so involves coming to terms not only with Eros (in its widest sense) but also with Thanatos has never been sufficiently emphasized, except perhaps by the post-Jungian James Hillman, by whose work Andriano is especially influenced. This book clearly and succinctly demonstrates that fear of the inner feminine prevents a man from ever fully maturing; his anima remains that of a child (he can only view women as girls or mothers), and he never comes to know, much less to love, the dark side of his soul, his own "lady of darkness."

Joseph Andriano is Professor of English and Assistant Head of the English Department at the University of Louisiana at Lafayette.