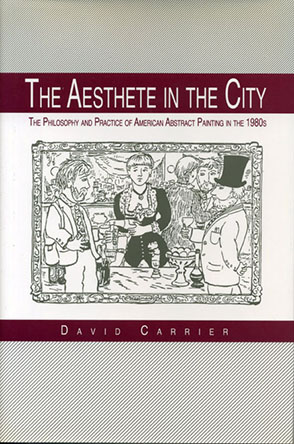 In the 1980s, when the American art market flourished, critics were heavily concerned with theory. In The Aesthete in the City David Carrier offers a personal view on the artistic activity of that decade. He begins with a theoretical perspective on the relationship between two very different forms of artwriting: art criticism and art history writing. Carrier surveys the developments within theory during the 1980s, focusing on constructive critical analysis of the then fashionable work of Jean Baudrillard, Walter Benjamin, T. J. Clark, and Jacques Derrida. He provides detailed accounts of a number of painters, among them Thomas Nozkowski, David Reed, and Sean Scully, whose development he followed closely. Carrier argues that the greatest American artistic tradition, Abstract Expressionism, provides the basis for an ongoing tradition of abstract painting, a rich system whose potential has not yet been exhausted.

Carrier's earlier work was concerned with a philosophical study of the methods of art criticism. This book turns to the theory and practice of art criticism, concentrating on a concrete discussion of individual theorists and artists.

“Carrier now emerges as a philosopher-critic with a presence that is very much an expression of an independent and unique mind, with an eye for continuities between past and present that no one else has seen, and a charming autobiographical way of telling the story of art. Many of the critical disputes of our time find wise and often surprising resolution in his essays. We the readers of his writing therefore see afresh, and are enabled to position ourselves towards our tradition and our contemporary creativity in a way that gives both understanding and comfort in a time that has been marked by cultural unease.”—Richard Kuhns, Columbia University