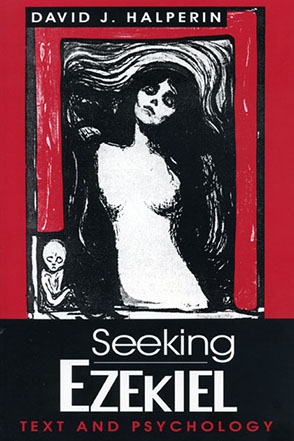 Ezekiel, Halperin argues, was dominated by a pathological dread and loathing of female sexuality. He expresses this emotional stance in the symbolic language of dreams (his vision of a temple polluted by idolatry); in a thin disguise of historical allegory (his obscenely graphic representations of Israel and Jerusalem as promiscuous wives); and in his self-described behavior at his wife's death.

Ezekiel also demonstrates a deeply ambivalent attitude toward a dominant male figure. Normally, he projects the positive elements of his ambivalence onto his God, its negative elements onto other males. Yet the reverse can also take place, and this does much to explain the disturbing cruelty and arbitrariness of Ezekiel's God.

Any psychological study of a man dead for 2500 years will run into formidable methodological difficulties. Halperin establishes the legitimacy of his approach by arguing that it permits the solution of a wide range of long-recognized textual problems.

The implications of Halperin's study extend far beyond the boundaries of Biblical scholarship. The sexual pathology that he attributes to Ezekiel has afflicted humanity for most of its history, tainting the relations of men and women the world over. Ezekiel's powerful influence on posterity has done its part in strengthening the grip of this pathology. By understanding Ezekiel, people may come to a better understanding of his sickness within themselves and thus eventually come to find healing.

David J. Halperin is Professor of Religious Studies at the University of North Carolina and author of The Faces of the Chariot: Early Jewish Responses to Ezekiel's Vision (1988) and The Merkabah in Rabbinic Literature (1980).