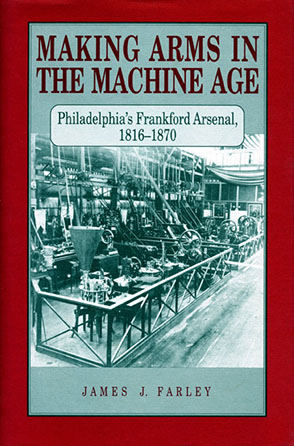 James Farley uses the history of the arsenal to examine larger issues including the changing technology of early nineteenth-century warfare, the impact of new technology on the United States Army, and the reactions of workers and their families and communities to the coming of industrialization. Shortly after the War of 1812, the U. S. Army founded several new arsenals, including Frankford, to build up supplies of arms and ammunition then in short supply. At that time, the Army was held in low regard because of its perceived poor performance in the war, so the arrival of arsenals was not welcomed. By 1870, however, the arsenal at Frankford had integrated itself into the community and become a valued and respected member of it.

Farley argues that the Ordnance Department of the U. S. Army created an industrial system of manufacture at Frankford well in advance of private industry. He also contends that the evolution of the Army into an employer of a large-scale civilian workforce helped to end the isolation and anti-militarism that plagued it after the War of 1812. Farley's study joins recent work in the history of technology, such as Judith McGaw's That Wonderful Machine, that seeks to understand technological change in its social and cultural context.