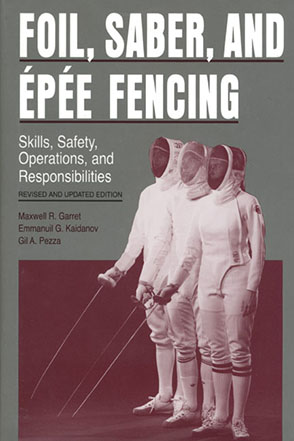 Three eminent coaches, each with a wide range of international experience, present their methods of teaching, which are compatible for the student choosing to learn the skills necessary in more than one weapon. Excellent photographs and diagrams illustrate the concepts, and an extensive annotated bibliography provides the reader with a wide selection of research materials. Late in the summer of 1993 new rule changes were adopted by the United States Fencing Association. These changes, which go into effect with the start of the 1993–94 fencing season, are included in this manual.

Foil, Saber, and Épée Fencing. also traces the transition of the art of duelling from the combat arena to the sports arena.

Maxwell R. Garret has been involved in many capacities in international fencing for over fifty years including as Head Coach at the University of Illinois and the Pennsylvania State University.

Emmanuil G. Kaidanov is a Fencing Master and Head Coach of the fencing program at the Pennsylvania State University. In 1990 and 1991, his team won two combined national championships.

Gil Pezza is President of the United State Fencing Coaches Association and served as Head Coach at Wayne State University from 1984 to 1990, during which time his team won two NCAA championships.