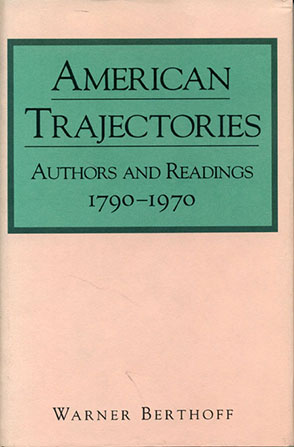 In American Trajectories Warner Berthoff argues that even in the broadest cultural and historical perspective, imaginative literature (like all the arts) is a matter of individual signatures and differences. He also puts forth that there are recognizable patterns and continuities marking off what is distinctively American, what both reflects and speaks for a shared national experience. Discussions of Emily Dickinson and Mark Twain, Scott Fitzgerald and Ernest Hemingway, Kate Chopin, Theodore Dreiser, and Edmund Wilson focus on the provenance and central character of writing by mainstream figures in our literary past. The essays on Brockden Brown, Nathan Asch, O. Henry, Frank O'Hara, Lewis Mumford, and Van Wyck Brooks highlight marginal, neglected, forgotten, or not yet fully acknowledged contributors to American writing.

“As someone who has depended heavily on Berthoff's earlier books (especially The Ferment of Realism and A Literature Without Qualities) as guides for reading and teaching, I feel a profound sense of gratitude for this new book, which is as full of provocative judgments, discoveries, and rediscoveries as its distinguished predecessors. The interior chapters span, chronologically, the whole extent of the literature of the United States, continually asking whether American books do in fact constitute a single, unfolding tradition, and examining claims pro and con. The synthesizing essays that open and close the book set the theoretical groundwork, in lucid and jargon-free terms, for the analysis of individual works and careers.”—Christopher Benfey, Mount Holyoke

Warner Berthoff is Henry B. and Anne M. Cabot Professor of English and American Literature Emeritus at Harvard University. He is author of several books, including Literature and the Continuances of Virtue (1986) and A Literature Without Qualities: American Writing Since 1945 (1979).