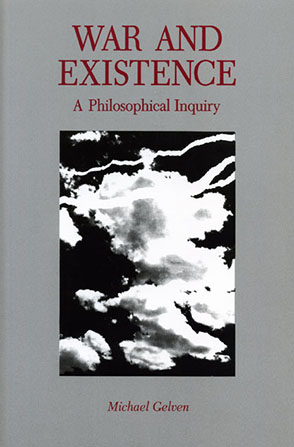 “War and Existence is a fascinating and well-written book, and is sure to add much to the debates of war and peace.”—Derek Sweetman, Journal of Peace and Conflict Resolution

War is a multifaceted and complex phenomenon that cannot be understood merely by isolating its underlying principles. The elements that compose the vast mosaic of our conceptions of war must be identified and examined in light of their philosophical origins. Michael Gelven not only identifies what the fundamental principles are, but he also extracts from the history of philosophy the arguments and analyses of the concepts that explain how we think about it.

War and Existence is primarily concerned with what war is or what the truth about war is rather than the moral question of whether war ever ought to be waged; it only indirectly considers the military concerns of how war out to be carried out. The elements or marks of war, such as courage, horror, heroism, sacrifice, command, and vastness, are each examined by reference to a great philosophical figure whose critical analyses of these elements provide us with a deep understanding of them. Gelven does not restrict his inquiry to mere formal concerns since the philosophical marks of war are concretized in judgments about actual wars. His holistic approach includes not only actual historical events that surround our greatest military conflicts but also literary figures, poets, and composers whose works wrestle with the enormity of this splendid yet troubling phenomenon.

The two phenomena, war and peace, are viewed against the entire background of humanity with all its folly and sublimity. War and Existence thus offers a thoughtful, coherent response to one of the most problematic issues of humanity.

“War and Existence is a fascinating and well-written book, and is sure to add much to the debates of war and peace.”—Derek Sweetman, Journal of Peace and Conflict Resolution