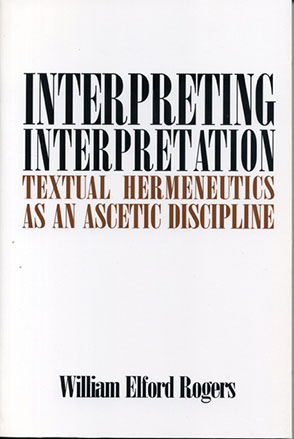 Interpreting Interpretation clarifies the conception of textual hermeneutics as an ascetic discipline by showing the consequences of this conception for interpreting canonical texts and for humanities education in general. Discussions of poetry by Robert Frost and by John Ashbery illustrate how this conception applies to an analysis of literary texts. Ultimately, the book offers a Peircean alternative to the educational theories implied in the pragmatism of John Dewey and of Richard Rorty. Rogers provides a new vocabulary for talking about what people are doing when they read, write, speak, and hear interpretive statements about texts. The new vocabulary acknowledges the great difficulty of "teaching texts" in the face of postmodern anxieties about pluralism, relativism, or nihilism. What emerges is not curriculum but method—an argument that the humanities teach not texts but interpretive systems.

Part I. Reconstructing Girls’ Education in the Postrevolutionary Period (1800–1830)

2. Schools, Schooling, and the Educational Experience

4. Independent Women? Teachers and the Teaching Profession at Midcentury

5. Vocations and Professions: The Case of the Teaching Nun

7. Political Battles for Women’s Minds in the Second Half of the Nineteenth Century

8. Beyond the Hexagon: French Schools on Foreign Soils

Appendix 2: The Professions of Fathers and Husbands of Parisian Headmistresses (1810–1880)

Reflection on the education of nineteenth-century bourgeois girls rarely conjures up images of fire and brimstone. Instead, most readers probably imagine saccharine religious and moral tales, straitlaced teachers, and dull lessons in becoming the accomplished wife and mother. For readers more versed in women’s history, the term “domestic ideology” springs to mind, as well as a host of scholarly studies on both the American and British middle classes. But this is a story about French middle-class education. Does that change the images one conjures up?

Readers of French nineteenth-century novels are likely to have quite a different set of images. Think of the education Emma Bovary received in her convent school in Rouen. Initially seduced by the mystical languor of Catholic liturgy, she quickly received more openly erotic stimulation through the laundress who sings love songs and sneaks novels into the convent. As readers of Flaubert’s famous novel know, this boarding-school education was poor preparation for the expected duties of a provincial middle-class woman, and it certainly contributed to leading Emma astray. Similarly, George Sand’s real-life education at the hands of the Dames Anglaises in many ways went seriously awry. Although the young Aurore Dupin experienced a period of devout religiosity while in school, she also assumed leadership of the “bad girls,” defied the school’s rules and regulations, led her classmates in escapades on the roof, and read quantities of strictly forbidden novels. Once liberated from her convent walls, her career as writer, feminist, and adulterous mistress must have shocked and horrified her erstwhile teachers. Balzac’s literature is also replete with young women whose boarding-school educations led them to lives in stark contradiction with the principles of bourgeois society. To take but one example, Mme Schontz in Beatrix (1841) becomes a wealthy man’s mistress, despite—or perhaps because of—her accomplished education at one of the schools of the Legion of Honor. Her mastery of the arts of conversation, painting, drawing, and music made her ineligible for the secluded life of the bourgeois wife.

British fiction adds another layer of images, frequently suggesting the inappropriateness of French girls’ education. In Elizabeth Gaskell’s Wives and Daughters, Cynthia Kirkpatrick finishes up her education at a French boarding school in Boulogne-sur-Mer. She returns to England a coquette, eager to seduce, but incapable of deeper love. Gaskell clearly suggests that the contrast between the serious and thoughtful Molly Gibson and her capricious stepsister, Cynthia, was in part the product of education; Molly’s English home education was clearly superior to Cynthia’s French education. British authors frequently portrayed French girls and young women in ways that highlighted the general laxness of French girls’ education, producing women prone to ostentation and subterfuge. In Charlotte Brontë’s novel Jane Eyre, for example, the heroine works to correct the flaws in Adèle’s character; this daughter of a French opera dancer has a tendency toward flightiness of character “inherited probably from her mother, hardly congenial to an English mind.” Such portraits presented French codes and mores as somewhat of a puzzle. Something about French girls’ education looks very different from its Anglo-American counterpart—or does it?

Alongside these images it is not difficult to find contrasting ones, although they may be less familiar to the nonspecialist. Think, for example, of those prim and proper bourgeois women whose images people family albums by the second half of the century. Surely their education bore little relationship to the fictional portrayals just described. Or there are the prolific writings of Mathilde Bourdon (1817–88), whose heroines find ultimate fulfillment in domestic settings. What were the recipes that produced such domestic bliss? Countless boarding-school mistresses, like Eugénie Dubois, offered an educational program that they argued would create “sweetness in the home, the joy of your fathers and the pride of your families”—no lessons in artifice and coquetry here. Are these snapshots of French bourgeois existence closer to the stuff of “real” history?

This book seeks to answer that question, suggesting that French girls’ education was far more complicated and multifaceted than any single image can suggest. The writer and educator Mme de Genlis summed it up nicely when she wrote:

The education of a woman can be compared to a complicated machine composed of many counterweights . . . the most ingenious and reasoned combinations are required to maintain the perfect equilibrium. One wishes a woman to have grace, instruction and some accomplishments, and one wishes that having acquired the means to seduce and to please, she would have only a moderate desire to please and would never seek to dominate. . . . See what nuances and difficulties there are in the education of a woman! One is forced to combine opposites, weigh virtues and reduce them carefully to the appropriate degree: what work!

Girls needed instruction, but also facility in the decorative arts; they needed to please, without seeking to seduce; above all, education was not the means to acquire authority. By comparing the education of girls to a “complicated machine,” de Genlis suggested that it involved fine tuning and subtle touches. In sum, it represented a challenging task for educators. Although not stating it directly, her description did not encompass all girls—she was describing the education of the middle and upper classes in the aftermath of the French Revolution.