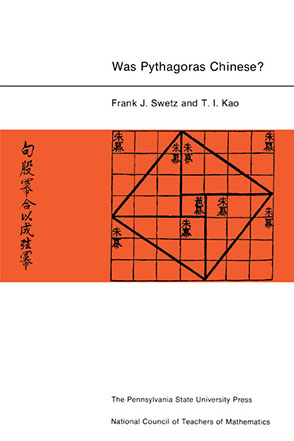 It is now acknowledged that the "Pascal Triangle" method of determining the coefficients of a binomial expansion was known in Sung China 300 years before Pascal was born, and that the root extraction algorithm credited to the 19th-century British mathematician W. G. Homer was employed by Han mathematicians of the 3rd century A.D. If, then, these mathematical processes are to bear the names of the persons who devised them, surely "Pascal" and "Homer" were Chinese. So too might such an argument be posed for the Pythagorean Theorem on the basis of evidence contained in ancient Chinese mathematics texts. It is the purpose of this monograph to present and examine this evidence.

This is a joint publication of the Penn State Press and the National Council of Teachers of Mathematics.

Frank J. Swetz, a member of the Department of Mathematics-and Education at The Pennsylvania State University, Capitol Campus, received his Ed.D. from Columbia University. He is the author of Mathematics Education in China and numerous articles.

T.I. Kao, an engineer with the Pennsylvania Department of General Services, took his graduate work at the New Mexico State University.