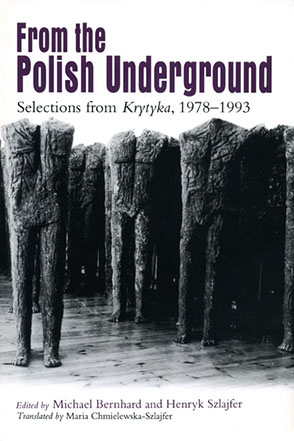 “This is a valuable book, necessary for the specialist on East and Central Europe and all who want to consider seriously the problem of democratic transition.”Contemporary Sociology

Since it first appeared in 1978, the Polish quarterly Krytyka (Critique) has been a showcase for some of the best writing on politics, sociology, cultural criticism, economics, and history from Poland. Founded by a group of oppositional activists that included Adam Michnik and Jacek Kuron, the journal began as an underground outlet for critical political thinking in the period prior to Solidarity. It survived the communist crackdown on Solidarity in 1981 to become the leading source of democratic thought in the new Poland. Today Krytyka is published ''above ground'' and continues to be the most consistent voice for a modern, democratic, and open Poland.

The twenty articles in this volume were chosen by Michael Bernhard, Henryk Szlajfer, and Jan Kofman, the present editor-in-chief of Krytyka. Covering the underground and post-underground years, they introduce the reader to the full range of topics and political views presented by the journal. Taken together these articles provide an excellent overview of the last fifteen turbulent years of Polish history.

“This is a valuable book, necessary for the specialist on East and Central Europe and all who want to consider seriously the problem of democratic transition.”Contemporary Sociology

Michael Bernhard is Professor of Political Science at Penn State University. He is the author of The Origins of Democratization in Poland: Workers, Intellectuals, and Oppositional Politics, 1976–1980 (1993) and co-translator of The Establishment of Communist Rule in Poland, 1943–1948 (1991).

Henryk Szlajfer is an economist and sociologist and a researcher at the Institute of Political Studies of the Polish Academy of Sciences. The author of a number of books and articles on comparative economic history, he is a professor at the G. C. Marshall European Center for Security Studies in Germany.