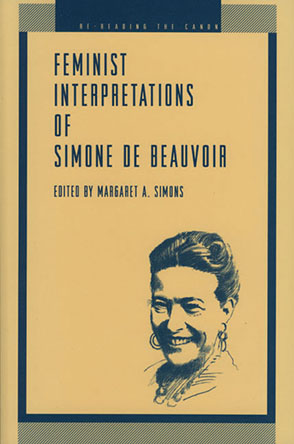 From phenomenology and literary criticism to analytic philosophy and postmodern deconstruction, this collection presents a unique variety of methodological approaches to reading Beauvoir: placing her within the phenomenological tradition and identifying the Husserlean influence on her work; using the posthumously published letters and notebooks to shed light on Beauvoir’s own experience of oppression and to deconstruct the philosophical movement that exploited her; analyzing the themes and structure of Beauvoir’s novel The Mandarins to study her philosophy of the erotic; examining the structure of her argument about women’s biology and sexual difference to challenge the criticism of Beauvoir’s phallocentricism; locating her writings on decolonization as a historical antecedent of the postmodern philosophy of destruction. Of particular interest may be the scholarly reading of little-known texts, such as Beauvoir’s essay on the Marquis de Sade, or her essay “Literature and Metaphysics,” in the context of her better-known texts, such as Ethics of Ambiguity, to trace Beauvoir’s philosophical development and challenge the view that Beauvoir was either Sartrean or phallocentric.

Margaret A. Simons is Professor of Philosophical Studies at Southern Illinois University at Edwardsville. She is coeditor (with Azizah al-Hibri) of Hypatia Reborn: Essays in Feminist Philosophy (1990).

2. The Second Sex and Philosophy/Karen Vintges (Translated by Anne Lavelle)

7. A response to a letter from Peg Simons, December 1993/Jeffner Allen

10. Out from Under: Beauvoir's Philosophy of the Erotic/Debra B. Bergoffen

13. The Second Sex: From Marxism to Radical Feminism/Margaret A. Simons

14. Beauvoir and the Algerian War: Toward a Postcolonial Ethics/Julien Murphy

Edited by Dorothea Olkowski, and Edited by Gail Weiss