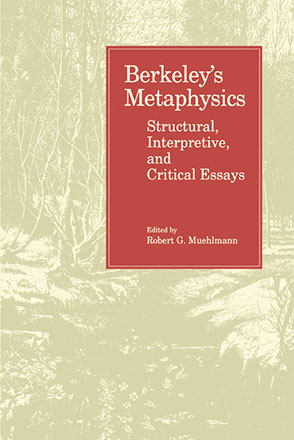 The seven essays in the first part, entitled “Idealism,” attempt to illuminate Berkeley’s notorious thesis that to be is to be perceived, that the esse of sensible things (trees, mountains, rivers, etc.) is percipi. Most of the essays in this first part are either direct or indirect responses to an influential interpretation of Berkeley’s idealism advanced thirty years ago by Edwin B. Allaire. The second part, “Volition, Action, and Causation,” contains four essays focusing on Berkeley’s volitionism, on his thesis that only the activities of minds (volitions) are causally efficacious. “Vision and the Perceptual Objects,” the third part of the volume, deals with Berkeley’s theory of vision and his doctrine that all of the objects of perception depend on God’s will for their existence.

Robert G. Muehlmann is Associate Professor of Philosophy at the University of Western Ontario. He is the author of Berkeley's Ontology (1992).

1. Berkeley's Idealism: Yet Another Visit/Edwin B. Allaire