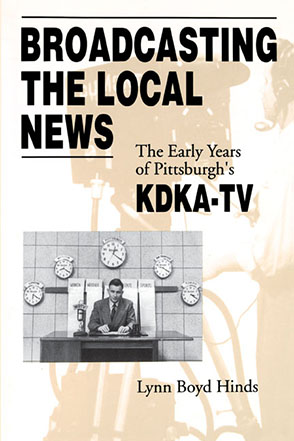 “The book provides an excellent foundation of history and understanding for broadcast news professionals, broadcast news students, and those interested in the early days of communications. It is well researched, well written, and well structured.”Journal and Mass Communication Quarterly

Every day millions of Americans tune in to a newscast on one of their local television stations to learn what is new in their community. In fact, more people watch local news than network news, but surprisingly little is known about the early days of television when stations across the country searched for ways to do news in the new medium. In Broadcasting the Local News, Lynn Boyd Hinds, a former Pittsburgh broadcaster, introduces us to one station—KDKA-TV—which literally invented television news in Pittsburgh.

Television came to Pittsburgh in 1949 when WDTV (the forerunner of KDKA-TV) went on the air. Whereas many television stations in the United States began reading news on the air only to comply with FCC requirements, WDTV treated news seriously from day one with its first regular program, a local news show called "Pitt Parade." Today KDKA is still highly regarded among journalists for its news programming.

Although television news may seem familiar to us, it was anything but familiar to the men and women of early television. Hinds shows how they borrowed liberally from newspapers, radio, motion picture newsreels, theater, and even magazines to create, by trial and error, suitable ways to present the news. Rather than instantly replacing radio, television news moved slowly from the "rip and read" radio-style format, which simply duplicated what came over the wire services and was in the newspapers, to the conventions of local newscasts we take for granted today—live remotes, lead and feature stories, sports and weather, all brought together by an in-studio anchor.

Pittsburghers will recognize many familiar names in Hinds's account—Bill Burns, Paul Long, Florence Sando, Eleanor Schano, and others—veterans of Pittsburgh broadcasting whom Hinds has interviewed for this book. The story they tell is the story of dozens of other stations across the country. In the process, they tell us much about the early history of television in America.

“The book provides an excellent foundation of history and understanding for broadcast news professionals, broadcast news students, and those interested in the early days of communications. It is well researched, well written, and well structured.”Journal and Mass Communication Quarterly

Lynn Boyd Hinds spent over twenty years in Pittsburgh television and radio before moving to Penn State University where he was an affiliate producer for WPSX-TV, the public broadcasting station in Central Pennsylvania. There he created and hosted the popular quiz show, "The Pennsylvania Game." Today he is Associate Professor of Broadcast News in the Perley Isaac Reed School of Journalism at West Virginia University.

While digging up the small museums of Pennsylvania, I often found myself saying, “What is a small museum?” “Where is it?” Why is it . . .?”

“Small museum.” The Metropolitan in miniature? What exactly does a small museum encompass? These words mean different things to different people, but in my travels I have come to believe that pretty much anyone can slap up a “Museum” sign on a building (and even, sometimes, get along with no sign at all) and some unsuspecting traveler will wander in off the road.

But that doesn’t make it a museum.

“Museum” conjures up an image of a large building. The Carnegie in Pittsburgh, the Franklin Institute in Philadelphia, the State Museum in Harrisburg. These places are well advertised and heavily visited. But who has heard of—or seen—the Wharton Esherick Museum in Valley Forge? Bill’s Old Bike Barn in Bloomsburg? The Toy Robot Museum in Adamstown? We also have a Wild West museum, a number of music museums, even a museum dedicated to the shoe. Pennsylvania is full of these little wonders.

Large museums are often created with corporate money or substantial private endowments, have curators, executive boards, and swanky fundraisers. Buildings may be designed with a particular genre in mind. Small museums are not always planned—they happen, maybe in the corner of someone’s house, or a storefront, or an old building no longer serving a useful purpose. If they have a “board,” it often means a husband and wife are in it together. “Fundraising” can mean an admission charge or merely a jar by the door labeled “Donations.”

Large museums house “important” items, great works of art, some famous person’s belongings. Little museums contain someone’s heart and soul. Most often they start out as a collection that just got out of hand. A couple in Hanover had (until not long ago) an ice cream museum. They still own the materials but for some reason wanted to reclaim their house. Sorry I missed it.

Other small museums are attached to companies—a room or two or an entire building—to commemorate an industrial history. The Marx Toy Museum in Erie was put together by former employees to showcase their dedication to the Marx Toy Company. I had the pleasure of visiting it, and fully intended to include it here, but later found it had closed up shop. Too bad.

Large museums take life and art very seriously, in hushed surroundings, with dim lighting and a closely monitored thermostat. But how seriously can one take a collection of carnival glass and spittoons that fills one small room in Breezewood with lit glass cases of multicolored wonder? Given a choice, I’ll take spittoons over fruit-bowl still lifes any day, but that’s the kind of hairpin I am.

Some small museums do feature a more serious side of life. The final stop on a tour of the Afro-American Museum in Reading is the closet trap door beneath which runaway slaves hid from their pursuers. A tour of any coal mine in the state will bring mention of a cave-in, how many miners died, what “black lung” is. Museums can feature a life, either a person’s—like the George Westinghouse or the Wharton Esherick—or a company’s—such as Piper Aviation or the Yuengling Brewery.

How did I come to choose these forty-two places out of the hundreds of small museums in Pennsylvania? I tried to find the unusual and the unknown, those places with little or no budget for advertising, yet worth a stop. I tried my best to represent the entire state. Small museums are best found through word of mouth (how we found the Toy Robot Museum) or stopping on a whim at the sight of a rotating, pasty-white weightlifter, destined to hoist his barbell forever in front of the Bob Hoffman Weightlifting Museum and Hall of Fame.

Locating the museum itself sometimes was an adventure. I often drove around a while, sometimes even clutching a brief set of directions. When a friend and I looked for one museum in a small central Pennsylvania town, it didn’t seem to be at the address we had. We stopped a man on the side of the road to ask for directions, but he said he hadn’t heard of it. He then called his wife over to help. When I said the name, she turned and pointed next door: “There it is.”

What makes a “good” museum? I’ve found that to be totally in the eye of the beholder. Someone who had been there told me not to bother with the Mushroom Museum in Kennett Square; I found it interesting (but smaller than its own gift shop). My husband would have been bored stiff in the New Holland Band Museum, but the musician in me loved it.

Digging up these museums wasn’t always easy. Knowing that some once existed but are no more was disappointing. Like the ice cream museum, both the Streitwieser Foundation Trumpet Museum and the Norman Rockwell Museum closed before I ever had a chance to visit. A lot of places are open only by appointment or have unpredictable hours. Sometimes phone aren’t answered regularly. But, just as often, someone is nearby who will be glad to open the door, to invite the traveler in for a look.

It seems as I continue this exploration, I find more and more museums that no one has heard of and yet, as soon as I describe what I’ve seen, my friends want to see them as well. The Best Places You’ve Never Seen are some I’ve visited. If you know of a little museum not mentioned here, one that you think I need to see, send me an email at smallmuseumsofpa@aol.com. More are yet to be discovered, I’m sure.