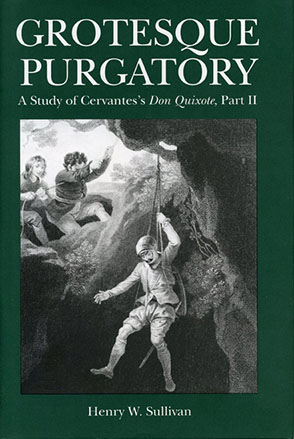 In this carefully researched and challenging study, Sullivan shows that chapters 22-24 (the Cave of Montesinos episode) represent an entrance into Purgatory, while chapter 55 is the exit from this realm. The Knight and his Squire are made to suffer excruciating torments in the chapters in between, experiencing a Purgatory in this life. This original reading of the book is coupled with an explanation that this Purgatory is "grotesque" since Don Quixote's and Sancho's sins are venial and can thus be cleansed by theological means against a background of comedy. By combining these two aspects, Sullivan exposes both the deeply agonizing and the comic aspects of the text. In addition, the combination of theological interpretation and Lacanian analysis to show Don Quixote's salvation/cure in this life results in a truly comprehensive vision of the Knight's progress. Sullivan also summarizes, in five different streams of critical tradition, the accumulated reception history of the Cave of Montesinos incident, drawing on scholarly writings from the nineteenth century to the present.

Henry W. Sullivan is Middlebush Chair Professor of Romance Languages at the University of Missouri. He is the author of The Beatles With Lacan: Rock 'n' Roll as Requiem for the Modern Age (1995) and Calderón in the German Lands and Low Countries: His Reception and Influence, 1654–1980 (1983).