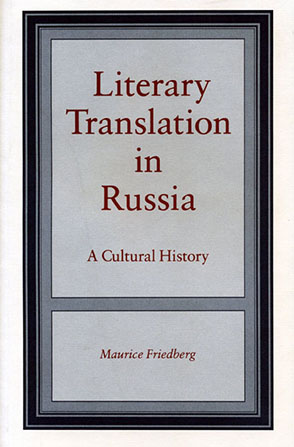 Beginning with Pushkin in the early nineteenth century, Friedberg traces the history of translation throughout the lives of Dostoevsky, Tolstoy, and, more recently, Pasternak. His analysis includes two translators who became Russia's leading literary figures: Zhukovsky, whose renditions of German poetry became famous, and Vvedensky, who introduced Charles Dickens to Russia. In the twentieth century, Friedberg points to Pasternak's Faust to show how apolitical authors welcomed free translation, which offered them an alternative to the original writing from which they had been banned by Soviet authorities.

By introducing Western literary works, Russian translators provided new models for Russian literature. Friedberg discusses the usual battles fought between partisans of literalism and of free translation, the influence of Stalinist Soviet government on literary translation, and the political implications of aesthetic clashes. He also considers the impetus of translated Western fiction, poetry, and drama as remaining links to Western civilization during the decades of Russia's isolation from the West. Friedberg argues that literary translation had a profound effect on Russia by helping to erode the Soviet Union's isolation, which ultimately came to an end with the dissolution of the Soviet Union in 1991.

Maurice Friedberg is the Center for Advanced Study Professor of Russian Literature at the University of Illinois at Urbana-Champaign. His books include How Things Were Done in Odessa: Cultural and Intellectual Pursuits in a Soviet City (1991).