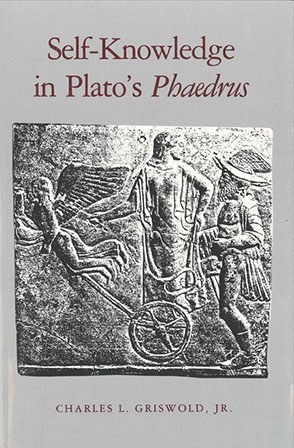 “Determined to take every part of the dialogue seriously as a single deliberate philosophical design, Griswold analyzes each episode in turn, with subtlety and much sensitivity. . . . This is a book well worth reading, and a commendable effort.”—Martha Nussbaum, Times Literary Supplement

In this award-winning study of the Phaedrus, Charles Griswold focuses on the theme of "self-knowledge." Relying on the principle that form and content are equally important to the dialogue's meaning, Griswold shows how the concept of self-knowledge unifies the profusion of issues set forth by Plato. Included are a new preface and an updated comprehensive bibliography of works on the Phaedrus.

“Determined to take every part of the dialogue seriously as a single deliberate philosophical design, Griswold analyzes each episode in turn, with subtlety and much sensitivity. . . . This is a book well worth reading, and a commendable effort.”—Martha Nussbaum, Times Literary Supplement

“The chief virtue of the book as a whole is that it goes to the heart of many of the central issues, both about the Phaedrus and about its author. The argument it contains is a potent mix: alternately provoking, illuminating, and infuriating. It is to be warmly recommended to anyone with a serious—or even playful—interest in Plato.”—Christopher J. Rowe, Washington Book Review

“Griswold has a refreshing approach to the traditional interpretive problems of this dialogue. He does not simply seek out a connection between its two apparently disconnected halves, but finds philosophic purpose in the very sharpness of the transition between them; and he argues, against the prevailing view, that not only the rhetorical and mythical speeches on love in the first half of the dialogue but even the formal methodologies of Collection and Division and of a philosophic rhetoric in the second are presented in such a way that their limitations show.”—G.R.F. Ferrari, Philosophical Review

“I highly recommend his book for those concerned with the question of how best to live a human life and Plato’s method of dealing with it in the Phaedrus.”—Jeffrey A. Mason, Philosophy and Literature

“Griswold’s reading of the Phaedrus is very attractive, and stands up well in comparison to readings of others coming from the same general philosophical tradition. . . . [He] has established himself as one of the leading interpreters of Plato in the United States today.”—Anthony Preus, International Studies in Philosophy

“Self-Knowledge in Plato’s Phaedrus is a comprehensive reading of one of Plato’s most wonderful dialogues. . . . Griswold never loses sight of the philosophical issue which he claims is the unifying thread of the Phaedrus: self-knowledge. This book teaches its reader how to read Plato, not simply as a ‘classic’ to be venerated, but as a teacher to be studied.”—David L. Roochnik, Classical Journal

Charles L. Griswold, Jr., is Professor of Philosophy at Boston University. He is editor of Platonic Writings/Platonic Readings (1988).