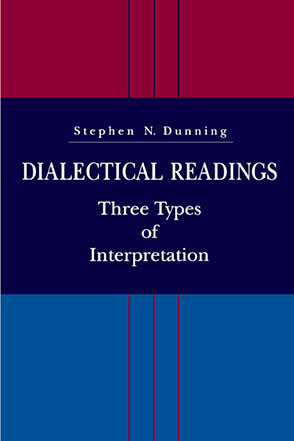 “This sort of interdisciplinary thinking is unavoidably tricky, preliminary, and controversial, but it seems to me crucial for the survival of the humanities as intellectual disciplines at the present time.”—William E. Rogers,

Interpretation pervades human thinking. Whether perception or experience, spoken word or written theory, whatever enters our consciousness must be interpreted in order to be understood. Every area of inquiry—art and literature, philosophy and religion, history and the social sciences, even many aspects of the natural sciences—involves countless opportunities to interpret the object of inquiry according to very different paradigms. These paradigms may derive from the language we speak, the nature of our education, or personal preferences. The abundance and diversity of paradigms make interpretation both fascinating in its complexity and often frustrating for the conflicts it generates.

“This sort of interdisciplinary thinking is unavoidably tricky, preliminary, and controversial, but it seems to me crucial for the survival of the humanities as intellectual disciplines at the present time.”—William E. Rogers,

“I believe this is a significant contribution to the field. It advances theoretical discussion by offering an original typology that is made concrete in the variety of texts that are presented as illustrative of each of the three major types of interpretation. The scholarship is sound and an amazingly wide variety of sources have been used very creatively.”—Merold Westphal, Fordham University

Stephen N. Dunning is Associate Professor and Chair of Religious Studies at the University of Pennsylvania. His books include Kierkegaard's Dialectic of Inwardness: A Structural Analysis of the Theory of Stages (1985) and The Tongues of Men: Hegel and Hamann on Religious Language and History (1979).