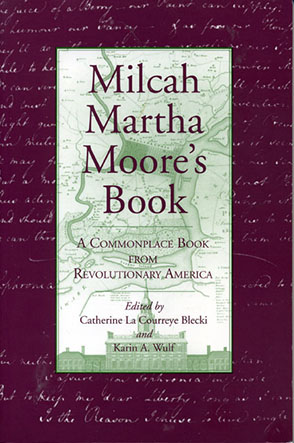 “Available in paperback, Milcah Martha Moore’s Book is a welcome addition to the few collections of eighteenth-century women’s documents and could be readily integrated into literature and history courses.”—Betsy Homsher, The Book (American Antiquarian Society)

Milcah Martha Moore (1740–1829) lived and flourished in the Philadelphia area during its peak, when it was the center of commerce, politics, social life, and culture in the young republic. A well-educated woman, disowned by her Quaker Meeting for an unauthorized marriage, Moore knew and corresponded with many of the leading lights of her day. From her network of acquaintances, she created a commonplace book, which is published here for the first time.

Moore compiled her commonplace book during the American Revolution, carefully selecting works of poetry and prose that she and her friends most enjoyed reading and wanted to remember. Contained are 126 works of prose and poetry by at least sixteen different authors, mostly women. Catherine Blecki and Karin Wulf have edited and reproduced the entire collection, adding helpful annotations and interpretive essays that set the collection in historical and literary context.

Moore's Book will be a treasure trove for feminist and early American scholars, for it includes two of the most avidly sought-after bodies of writing from British America: sixteen new poems (twenty-four in all) by the Quaker polymath Susanna Wright and a previously lost portion of the journal kept by Elizabeth Graeme Fergusson during her trip to England. There is also a remarkable selection of pieces by Hannah Griffitts, the Quaker moralist and wit who commented on politics, society, and domesticity during the Revolution. Moore also included writings by Benjamin Franklin, Patrick Henry, and Samuel Fothergill.

While scholars have speculated about the extent to which elite women exchanged ideas through reading and writing during this period, Moore's Book is the richest surviving body of evidence revealing the nature and substance of women's intellectual community in British America. The quality of the writing is high and reflects a range of popular literary genres including religious and meditational poetry, elegies, verse epistles and extempore verse, hymns, occasional poems, letters, and journal writing. Topics range from family and friends to religion and mortality, to politics and war—belying the notion that women's concerns were limited only to a domestic sphere. Taken as a whole, Moore's collection presents an unparalleled view of the interests and tastes of educated women in early America.

“Available in paperback, Milcah Martha Moore’s Book is a welcome addition to the few collections of eighteenth-century women’s documents and could be readily integrated into literature and history courses.”—Betsy Homsher, The Book (American Antiquarian Society)

“Whether examining the merits of single life, the bonds of friendship, the life of the spirit, or the painful process of revolution, the 126 works in this commonplace book represent a lively conversation among Moore’s contemporaries. . . . This glimpse into the complex world of Revolutionary-era Quakers casts in a new light the value of the circulating manuscript as a literary exercise. . . . Fine essays by Blecki and Wulf explore the biographical, historical, and literary contexts of this exciting addition to the growing body of recovered women’s texts.”Choice