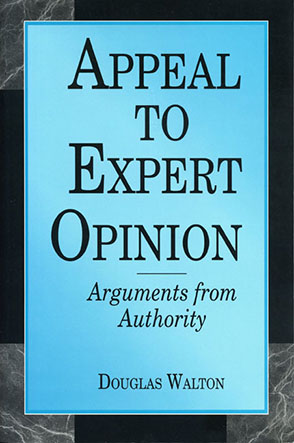 Reliance on authority has always been a common recourse in argumentation, perhaps never more so than today in our highly technological society when knowledge has become so specialized—as manifested, for instance, in the frequent appearance of "expert witnesses" in courtrooms. When is an appeal to the opinion of an expert a reasonable type of argument to make, and when does it become a fallacy? This book provides a method for the evaluation of these appeals in everyday argumentation.

Specialized domains of knowledge such as science, medicine, law, and government policy have gradually taken over as the basis on which many of our rational decisions are made daily. Consequently, appeal to expert opinion in these areas has become a powerful type of argument. Challenging an argument based on expert scientific opinion, for example, has become as difficult as it once was to question religious authority.

Walton stresses that even in cases where expert opinion is divided, the effect of it can still be so powerful that it overwhelms an individual's ability to make a decision based on personal deliberation of what is right or wrong in a given situation. The book identifies the requirements that make an appeal to expert opinion a reasonable or unreasonable argument. Walton's new pragmatic approach analyzes that appeal as a distinctive form of argument, with an accompanying set of appropriate critical questions matching the form. Throughout the book, a historical survey of the key developments in the evolution of the argument from authority, dating from the time of the ancients, is given, and new light is shed on current problems of "junk science" and battles between experts in legal argumentation.

Douglas N. Walton is Professor of Philosophy at the University of Winnipeg. He has published two books with Penn State Press, The Place of Emotion in Argument (1992) and Arguments from Ignorance (1995). Other recent books of his include Slippery Slope Arguments (1992) and Plausible Arguments in Everyday Conversation (1992).