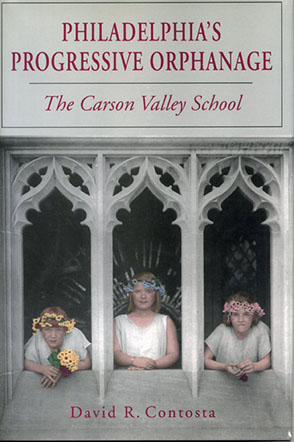 “The story of Carson College is one of many stories that, taken together, answer the question, What happened to progressivism? . . . Contosta tells this story clearly and succinctly while avoiding the trap of excessive detail that characterizes many institutional histories. Based solidly on primary materials and interwoven with relevant secondary literature, Philadelphia’s Progressive Orphanage is a model institutional study.”Journal of American History

For more than seventy-five years, the Carson Valley School has served the needs of orphaned girls and other dependent children from Philadelphia and neighboring Pennsylvania counties. Its hundred-acre campus is remarkable for its rolling terrain, neo-medieval buildings, and design as a fantasy village.

A legacy of the progressive education movement of the early decades of the twentieth century, the school was formally opened in 1918 as the Carson College for Orphan Girls. Its first president, Elsa Ueland, was a former settlement house worker who was a student of John Dewey and Maria Montessori, and her life story is closely intertwined with that of the school she oversaw for nearly half a century.

The institution was originally endowed by the $5 million estate of Philadelphia trolley magnate Robert N. Carson, who had stipulated in his will that it could receive only white, parentless girls. Over the decades, Ueland and her successors were able to remove these restrictions, so that by the 1970s Carson Valley was admitting children regardless of race or gender, as well as neglected and dependent youths whose needs were every bit as pressing as those of orphans of earlier times.

David Contosta's history of Carson Valley shows that it has long been a model of progressive education. Its faculty is dedicated to serving the individual needs of each child, preparing students to enter the workplace, and breaking down artificial barriers between school and the outside world. Drawing on Ueland's personal papers to communicate both her hopes for the Progressive era and her achievements during the early years of the school, Contosta tells how teachers and housemothers forged a unique collaboration that joined home and school in ways that other progressive educators could only dream of. He also notes the architectural significance of its enchanting facilities, which have played an integral part in the institution's treatment program.

Philadelphia's Progressive Orphanage clearly shows not only how Carson Valley has been shaped by a multitude of social, cultural, and political forces, but also how many of the reforms of the Progressive era remain in place today. It establishes Carson's place in the history of education and child welfare and makes an important contribution to renewed debate about orphanages and dependent child care.

“The story of Carson College is one of many stories that, taken together, answer the question, What happened to progressivism? . . . Contosta tells this story clearly and succinctly while avoiding the trap of excessive detail that characterizes many institutional histories. Based solidly on primary materials and interwoven with relevant secondary literature, Philadelphia’s Progressive Orphanage is a model institutional study.”Journal of American History

“The Carson Valley School has been an institutional embodiment of Progressivism. David Contosta is very effective in making the links between the larger Progressive ideology and the specifics of Carson. He has cast the story of this unique institution in a way that will maximize its interest for the history of education, social work, philanthropy, and urban institutions.”—Robert Fishman, Rutgers University, Camden

David R. Contosta is Professor of History at Chestnut Hill College, Philadelphia. He is the author of many books, including Henry Adams and the American Experiment (1980) and Villanova University, 1842–1992: American—Catholic—Augustinian (Penn State, 1995).