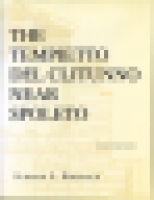 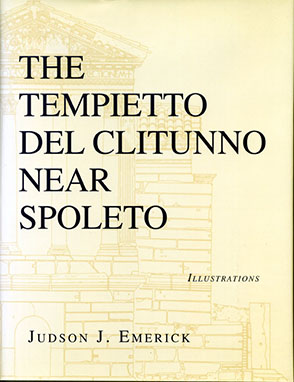 For centuries scholars have puzzled over the chapel's lavish Corinthian column screens, the crosses surrounded by Neo-Attic vine scrolls in its pedimental reliefs, and the Christian Latin inscriptions in huge Neo-Augustan block capitals from its friezes. The sixteenth-century humanists who named the building the "Tempietto del Clitunno" treated it as an ancient Roman temple that the Christians later converted. But modern art historians, learning that the Tempietto had been built from the ground up as a chapel, declared it an anomaly, the product of a most startling and unexpected Early Christian and medieval classical revival.

Emerick intervenes by critiquing the notion of classical revival in medieval architecture. Impatient with the old Enlightenment historical plot that makes the Tempietto into a dark-age prodigy, Emerick boldly redescribes the architectural record to take away the Tempietto's strangeness. He shows conclusively that the chapel's orders, pedimental reliefs, and inscriptions conform to ancient Roman Imperial Corinthian standards, but then goes on to show that just this Corinthian decorative system was frequent, even normal in festive, public, Christian cult rooms from Constantine's day down through the twelfth century.

History of style as an end in itself yields here to style treated as political phenomenon. Emerick turns to the frescoes on the Tempietto's rear apse wall for clues to the builders' political goals. He explains how grandees from the medieval Lombardo-Frankish Duchy of Spoleto, full participants in a Christian theocratic state, set up an array of Mediterranean icons inside the Tempietto to enhance their social and political control. The chapel's Corinthian decorative system, he concludes, must be integral to this political program.