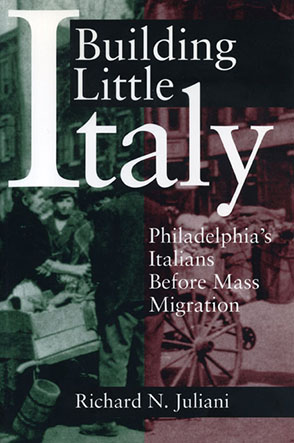 “In Building Little Italy, Richard Juliani has given us the definitive case study of Italian community formation in the United States. No other scholar has so exhaustively researched, so skillfully written about, or so imaginatively conceived the question of early Italian settlement before the age of mass migration. It will remain the essential guide for all future work in the field.”—Philip V. Cannistraro, Queens College/CUNY

Philadelphia's first Italian immigrants arrived in the mid-eighteenth century. Artists and scholars, tradesmen and entrepreneurs, they established a new community—one of the first "Little Italies" in America—that would provide not just a home but a sense of belonging for later arrivals. Richard Juliani tells the story of early Italians in the City of Brotherly Love: why they chose that city, what their lives were like, where they lived, and how they interacted. Examining Italian settlement from pre-Revolutionary times up to the eve of mass migration in the 1870s, he shows how these early pioneers created the basic structure of the community that would continue into the twentieth century.

Juliani has devoted thirty years of research—combing through newspapers, public archives, religious records, business documents, and files of private organizations—to recapturing the creation of a community. He describes such factors as regional origins, methods of migration, and population growth; patterns of age, sex, income, and occupation; family structure and living arrangements; and the formation of communal institutions.

But more than providing data, Juliani explores the private lives of many individuals in the Italian community—notably business leaders who spearheaded fraternal societies and political clubs—and tells how early immigrants made a significant contribution to the city's life. He also compares the Philadelphia community with other Italian colonies, particularly in New York, and shows how, after years of being looked upon in a favorable light, a more negative view toward Italians began to emerge.

The early Philadelphia Italian community has never before been studied despite the existence of a large body of records from this period. Building Little Italy provides a rare opportunity to witness the origins of an ethnic community. By presenting a meticulously detailed profile of the Italian immigrant experience through its early stages of development, it captures a piece of local history that has been too long ignored.

“In Building Little Italy, Richard Juliani has given us the definitive case study of Italian community formation in the United States. No other scholar has so exhaustively researched, so skillfully written about, or so imaginatively conceived the question of early Italian settlement before the age of mass migration. It will remain the essential guide for all future work in the field.”—Philip V. Cannistraro, Queens College/CUNY

“In this useful study, Richard Juliani builds on the methods and insights of thirty years of research on Italian American life during the mass migrations, but charts a new course by examining the years before 1870.”—Donna R. Gabaccia, Journal of Social History

“Juliani’s work is a richly detailed study of one of the earliest Italian communities in the United States. There are many community studies of Italians, but there are few that have examined, in such depth, the creation of Italian life before the era of mass migration.”—Diane C. Vecchio, Journal of American Ethnic History

“In Building Little Italy, Richard N. Juliani has undertaken an enormous task and filled a major void in our appreciation of the role that Italians played in early American history.”—Salvatore J. LaGumina, Journal of American History

“Juliani’s important scholarship has filled a gap in the way we conceive of immigrant community building in America.”—Robert M. Zecker, Labor History

“Juliani has produced a work of remarkable scholarship. Building Little Italy, not only fills a gap in the growing literature on the Italian-American experience but will also serve as the standard reference for further research in the field.”—Stefano Luconi, American Studies

“All constraints aside, however, Juliani has provided us with important insights into the life circumstances early Italian settlers encountered in Philadelphia, their efforts to establish an Italian community for themselves, and their children, and the many contributions they made to the development of the city itself.”—Sam Migliore, Canadian Sociology and Anthropology Association

“Building Little Italy is an insightful and compelling account of the creation and dynamic development of Philadelphia’s Italian community. Richard Juliani has provided a model of how ethnic history should be written.”—Spencer Di Scala, University of Massachusetts at Boston

“Building Little Italy clearly shows that Italians exerted a much greater influence on the city than has been supposed and provides a rare opportunity to witness the origins of an ethnic community. By presenting a meticulously detailed profile of the Italian immigrant experience through its stages of development, the book captures—in words and pictures—a piece of local history that has been long ignored.”Pennsylvania Heritage

“Immigration scholars will appreciate this effort to depict and analyze the the often overlooked pre-mass migration period. Those with a more general interest in either Philadelphia history or Italian immigrants will find the book both interesting and enjoyable.”—R. F. Ziedel, CHOICE

“Building Little Italy is a serious work of scholarship that sheds considerable light on areas of history and population study where previously there were but shadows.”—Albert DiBartolomeo, Philadelphia Inquirer

“Rarely have historians of a major immigrant group invested as much effort in tracing the early pioneers as has Juliani in this work. Juliani has sympathetically reconstructed the initial stages of immigrant community formation and imaginatively drawn from a wide range of sources. He provides new insight into the process of how a discrete group of individuals formed social networks and worked to create the base for Philadelphia’s large Italian American community.”—Roger D. Simon, H-Urban

“Juliani’s study provides the seeds for countless stories that can take us away from the earlier images of Little Italy given to us by others. Building Little Italy is definitely a benchmark study in terms of methodology and context provided, if not in style.”—Fred L. Gardaphe, Fra Noi

“This book will interest anyone concerned with Italians in the United States and, more generally, students of immigration.”—Richard D. Alba, Contemporary Sociology

Richard N. Juliani is Professor of Sociology at Villanova University. He is the author of The Social Organization of Immigration: The Italians in Philadelphia 1980) and co-editor of New Explorations in Italian American Studies (1994).