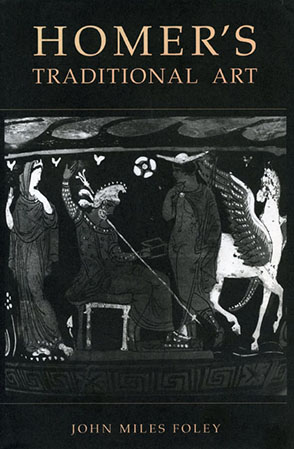 “John Miles Foley’s Homer’s Traditional Art is an important book for anyone interested in the application of oral theory to early Greek epic.”—Susan C. Shelmerdine, Classical and Modern Literature

In recent decades, the evidence for an oral epic tradition in ancient Greece has grown enormously along with our ever-increasing awareness of worldwide oral traditions. John Foley here examines the artistic implications that oral tradition holds for the understanding of the Iliad and Odyssey in order to establish a context for their original performance and modern-day reception.

In Homer's Traditional Art, Foley addresses three crucially interlocking areas that lead us to a fuller appreciation of the Homeric poems. He first explores the reality of Homer as their actual author, examining historical and comparative evidence to propose that "Homer" is a legendary and anthropomorphic figure rather than a real-life author. He next presents the poetic tradition as a specialized and highly resonant language bristling with idiomatic implication. Finally, he looks at Homer's overall artistic achievement, showing that it is best evaluated via a poetics aimed specifically at works that emerge from oral tradition.

Along the way, Foley offers new perspectives on such topics as characterization and personal interaction in the epics, the nature of Penelope's heroism, the implications of feasting and lament, and the problematic ending of the Odyssey. His comparative references to the South Slavic oral epic open up new vistas on Homer's language, narrative patterning, and identity.

Homer's Traditional Art represents a disentangling of the interwoven strands of orality, textuality, and verbal art. It shows how we can learn to appreciate how Homer's art succeeds not in spite of the oral tradition in which it was composed but rather through its unique agency.

“John Miles Foley’s Homer’s Traditional Art is an important book for anyone interested in the application of oral theory to early Greek epic.”—Susan C. Shelmerdine, Classical and Modern Literature

“No one interested in Homer can afford to ignore this book.”—Susan C. Shelmerdine, Classical and Modern Literature

“His fluency in an eclectic but thoroughly integrated range of theoretical stances enhances the book’s utility as a methodological resource and its effectiveness as a guide for discovering the poetics that enable our reception of oral tradition verbal art forms such as the Homeric poems.”—James Wells, Journal of Folklore Research

John Miles Foley is William H. Byler Distinguished Chair in the Humanities and Curators' Professor of Classical Studies and English at the University of Missouri, Columbia, and the editor and founder of the journal Oral Tradition. Among his recent books are Traditional Oral Epic (1990) and The Singer of Tales in Performance (1995).