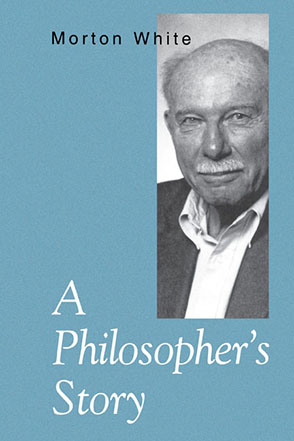 “A happily detailed chronicle of decades at the heights of American academe, teeming with shrewd observations about the stars of Ivy League intellectual life.”—Carlin Romano, Philadelphia Inquirer

A Philosopher’s Story is the autobiography of a prominent philosopher whose interactions with other leading thinkers and experiences at major institutions of higher learning over a period of time of more than fifty years make this an informative introduction to the intellectual life of late twentieth century America. During his academic career, Morton White has been involved in a number of controversies that have raised profound issues. One concerned the role of religion at Harvard in the 1950s; another was precipitated by the student rebellion at Harvard in the 1960s; and a third surrounded the question of academic governance at the Institute of Advanced Study during the 1970s. Throughout his academic career he has been an intellectual bridge-builder who has tried to avoid the pitfalls off wooliness and obscurity while uniting his widely spread interests. This is a professor’s story with many distinguishing features. Like other examples of the author’s writing, it reflects many different aspects of American thought and society during the twentieth century.

“A happily detailed chronicle of decades at the heights of American academe, teeming with shrewd observations about the stars of Ivy League intellectual life.”—Carlin Romano, Philadelphia Inquirer

“White’s autobiography is a worthy addition to all collections, both for its insights into the world of university teaching and as a mirror held up to one corner of a turbulent century.”Library Journal

“Although a great many memoirs are being published these days, this autobiography by Morton White has special significance because professional philosophers seldom write their memoirs and, when they do, they rarely produce books as engaging as this one. As historian of ideas and a philosopher, White is able to situate his life in the deeper and broader intellectual currents of his time, and therefore the story of his experiences at Columbia, Harvard, and the Institute for Advanced Study is a brilliantly conceived contribution to the history of American philosophy in the twentieth century. Readers concerned with the development of higher education will be fascinated by White's description of the struggles over religion at Harvard in the 1950s, while historians of urban life will be much interested in his vivid account of his boyhood on the Lower East Side of New York. And students of pragmatism will learn much about the twentieth-century attack on the distinction between analytic and synthetic statements from a letter written to White by the Polish logician Alfred Tarski, and from the three-way correspondence of Nelson Goodman, W. V. Quine, and White reproduced in an appendix. The author's discussion of his contact with such influential thinkers as John Dewey, G. E. Moore, and Isaiah Berlin, and especially his extensive correspondence with Berlin, will further enhance the book's appeal to a broad audience. Indeed, White's autobiography should attract more attention among the educated public than any book written by an American philosopher in many years.”—Peter H. Hare, SUNY Distinguished Service Professor of Philosophy, Transactions of the C. S. Peirce Society: A Quarterly Journal in American Philosophy.

Morton White is Professor Emeritus at the Institute for Advanced Study in Princeton, New Jersey. Among his many well-known books are Social Thought in America (1948), Foundations of Historical Knowledge (1965), Science and Sentiment in America (1972), and The Question of Free Will (1993).