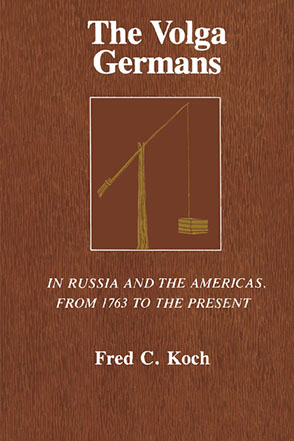 Since 1874 many inhabitants of this overpopulated land island between Saratov and Volgograd (formerly Stalingrad) have emigrated to the Western world—to homesteads from the plains of western Canada to the pampas of Argentina, but chiefly in the U.S. By 1920 more than 300,000 Volga Germans were counted in the U.S., mostly in the private states but including 24,000 in the East and 30,000 on the West Coast. Meanwhile, the number of German-derived residents of the Soviet Union exceeded two million—the original Evangelical and Roman Catholic settlers having flourished, despite adversity, and having been joined by Mennonites in 1854.

The author paints a vivid picture of the pioneering activities of the Germans on the Volga, meeting the challenges of a hostile environment and raids by brigands, and keeping their culture alive through an elaborate system of parochial schools.

A century ago population pressure forced many Volga Germans westward to the Americas, or eastward to Turkestan and Siberia somewhat later. Although Lenin established a Volga German Autonomous Republic, Stalin abolished it in 1941 during the Nazi invasion and deported its population to Siberia and Central Asia. A 1964 Soviet decree retracted wholesale charges of disloyalty against the Volga Germans but denied restoration of their Republic.

The story of the Volga Germans and their adventures in North and South America from 1874 to the present is a warm and vibrant one. Both laymen and scholars will find it rewarding.

Fred C. Koch, who came to the U.S.A. from the Volga German colony of Kolb at the age of five, has spent his entire career on newspapers in the State of Washington: in Wenatchee, Cashmere, Spokane, and Seattle. During World War II he served with the Office of War Information in London, the Office of Psychological Warfare in Paris, and military government in Frankfurt and Berlin. He is a graduate of the University of Washington and is active in the American Historical Society of Germans from Russia.